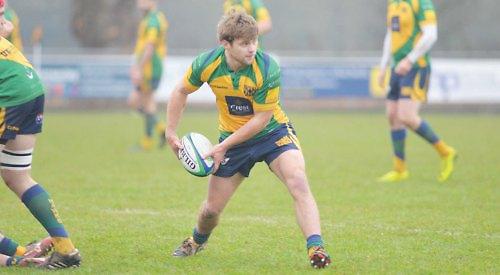 HENLEY BULLS halted their recent run of narrow defeats in a game where patience and opportunism were called for in equal measure away at Bury St Edmunds Wolfhounds last Saturday.

Scott White returned to the Bulls along with Matt Thomas at lock and Luke Govier at fullback after a lay-off with injury.

The Wolfhounds took control of the pace and possession for much of the opening 10 minutes. Several set-piece opportunities fell to the Wolfhounds but the Bulls repelled each with some venomous defence and a spot tackle from Harry Burn which forced the turn-over that allowed the Bulls their first taste of possession.

The Bulls’ ability to retain possession matched that of their opponents and the game swung to and fro between the 22-metre lines for a short time until pressure from the Bulls defence caught the Wolfhounds’ wing in an isolated position and as he was dispossessed by Dyneal Fessal, Sam Portland hacked the loose ball through towards the try-line and a chase ensued which centre Nick Arnell and Portland did well to win forcing the cover to fumble and allow Harry Burn to collect and scamper over the line. Govier skewed his first kick left of the posts.

The Henley pack played well as a collective in slowly but surely gaining ground on the softening pitch which was proving difficult to play an expansive game on but when the opportunity arose Tom Haynes showed his form bursting up the left side and further slick handling saw Thomas a yard or two out. With the defence closing Thomas threw the perfect pass to Arnell who spotting the cover defence heading his way threw an inside pass over the top of them to Jimmy Stephenson-Wright to touch down for the Bulls’ second and Govier to convert. Half-time came with the score 12-0 in the Bulls’ favour. Early in the second half Zaki Chamnaoui and Jamie Cox drove the Bulls to the line for Ziana Alexis to squeeze over for the third try.

The Bulls lost flanker George Lane at the this point and his replacement Liam Trinder added to the splintering runs of White and Haynes.

At this point 10 minutes into the second half the pattern of play altered with the Wolfhounds centres taking an opportunity to score under the posts with a well worked pattern of play that sparked a resurgence in the spirit.

Soon after Alexis was given a 10-minute penalty in the sin-bin and in his absence the Wolfhounds used the weight advantage at the scrum to tie up the Bulls defence and bring the scores much closer with a second converted try from a more direct play.

The Bulls had 10 minutes to see out when Alexis returned to the field and managed to keep the Wolfhounds at arm’s length for much of the closing period with some good close quarter ball retention and territorial line-breaks from Toby Venner who ensured the visitors spent much of the last eight minutes in opposition territory pressing for a bonus try. The try eluded them which was reflective of the Wolfhounds’ determination to steal a late try themselves.