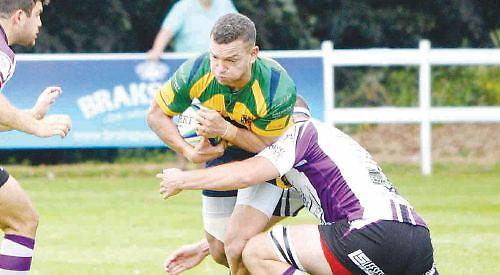 This was a game that the Hawks dominated at times but the host side showed determination to make the visitors work hard for victory in the closing minutes.

The game was played in mild conditions in a certain amount of cloying mud. This did not deter the Hawks from playing an open game and the opening 10 minutes demonstrated that they came to use the ball in hand at every opportunity.

The Hawks were testing the opposition defence with the ample possession they had. This phase of play led to a try after just five minutes when wing Xavier Andre burst through to score after all round support. The conversion was missed by George Jackson from a wide position.

The home side now began to move the game into the Hawks’ territory but found their defence generally sound but mistakes in general play did not put pressure on the Hawks although they did have one opportunity to break through when a hurried zip pass in a backs movement went to ground but Bury did not take advantage. Wing Scott Lyle did push a penalty attempt wide from a favourable position after 10 minutes.

The Hawks forwards, whilst struggling for parity in the set scrums, began to show authority when they organised driving mauls and after putting pressure on the Bury line drove successfully to enable Rob Bell to touch down a second unconverted try after 21 minutes.

Despite holding the lead the visitors were still tested by some handling by the home backs although their tackling just outside their 22 was effective enough for Bury to throw a wild pass which was intercepted overhead by Hawks’ wing Simon Perry who accelerated away on a run of some 70 yards. He used running skills to avoid approaching tackles and once in the Bury half was able to scorch away to touch down under the posts for the try of the game. This with Jackson’s conversion took Henley’s lead at half-time to 17-0.

In recent times the Hawks have been slack at controlling re-start kick-offs. Immediately this was true again when an innocuous kick-off was muddled by the Hawks’ lock David Hyde and Andre who then gave away a penalty in trying to recover the resultant chaos. Bury, thankful for the error, seized the opportunity to drive over the nearby line for centre Sam Sterling to go over for a try which Lyle converted to make the score 17-7 after 42 minutes.

The Hawks quickly recovered their breath and an attacking lineout near the Bury line was used effectively for skipper Dave Clements to make a good clean catch which was capitalised on with a concerted drive for the line which enabled replacement Connor Morrison to touch down which with a good conversion by Jackson took the score to 24-7.

The Hawks’ expectations of easing away to a comfortable finish were soon dashed. Within four minutes they were reduced to 14 men when centre Alan Awcock was removed from the game with a red card when he landed a retaliatory punch. In the next 20 minutes the Hawks were faced with a resurgent Bury side who could now have their sights on a victory which had seemed very unlikely. The Hawks for their part were showing sturdy resistance to whatever the opposition could throw at them.

Nevertheless centre Sterling was able to squeeze over for his second try. With the final seconds ticking away Bury were now using effective line-out play to drive Darren Stapleton over for a try. With Lyle in good kicking form converting both tries the score now stood at 27-21.

With two minutes of play left the Hawks were still pinned less then 20 metres from their line. They were not ready to surrender as they retained possession from a line-out and after a penalty scrum-half Jackson was able to slam the ball into touch to earn a victory with one man missing for most of the second half.

This win, worth five league points, allowed the Hawks to leapfrog Bury St Edmunds in the league to ninth place.