Nuns' triumph maintains pursuit of a league and cup double 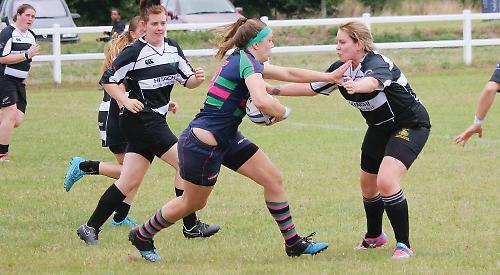 ABBEY NUNS remain on course to win double silverware this season as they reached the quarter-finals of the Junior Cup with an emphatic 50-5 demolition of Kenilworth, writes Fiona Tomas.

The league leaders ran in eight tries past their Warwickshire opponents as they emulated the same attacking rugby that looks to have all but secured them the title.

But there was no complacency as the in-form Alice Denton ripped the ball early on from a Kenilworth player and flew down the pitch before off-loading to winger Annette Tomas who ran in under the posts. Moments later it was Dominique Felix’s turn to charge through Kenilworth’s defence, popping the ball up to Hayley Matthews who finished a brilliant solo effort with another five points.

Flanker Annabel Hawkins made her first start for Abbey after two seasons playing for Championship 1 side Hove and made her mark when she perfectly set up Tomas who sped in for her second to make it 17-0. Abbey looked a constant threat as Tomas went over for her anticipated hat-trick from a quick penalty tap and then combined again with Hawkins who went over for Abbey’s fifth.

The second half was a similar one-sided affair. Abbey dominated as Joey Fowler made some storming runs and Natalie Bow covered well at the back. Tomas went over again twice and prop Hollie King joined in on the fun after executing a pick-and-go move.

Although Warwickshire-based Kenilworth had remained unbeaten this season, they were no match for high-flying Abbey who play in a league above them. The attacking intensity showcased by the Nuns side did not abate all afternoon and at the heart of it were half-backs Sarah Northover and Ellie Rice, who played a pivotal role in directing solid forward play.

Kenilworth’s centre grabbed a consolation try minutes before the end to avoid the whitewash but it did little to dampen Abbey’s spirits, who extend their match winning streak to 16 games.