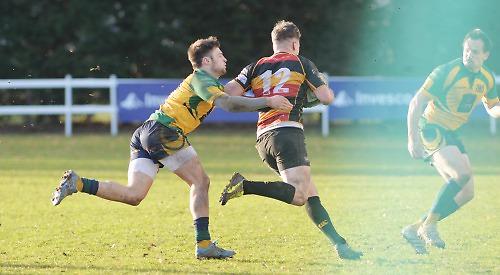 IN almost perfect conditions, Cinderford edged a hard fought encounter at Dry Leas which saw more action in the final quarter of the match than in the rest of the game.

The Hawks enjoyed a lot of possession, especially in the first half, but will rue a number of missed opportunities and the ability to use that possession to exert a constant attacking threat on the opposition.

Both sides cancelled each other out in the early exchanges but the visitors’ forwards began to lay the foundations for victory. The Hawks in contrast tried to play a more expansive game but often lacked any real threat and didn’t really put the visitors’ defence under enough pressure.

Cinderford were totally in control at the scrum and won a series of penalties from those exchanges throughout the match. One such penalty after 19 minutes allowed fullback James Moffat to open the scoring for the visitors.

Henley increased their intensity with skipper Dave Clements leading by example, well supported by Marcus Lowe with a series of powerful drives. The pressure led to George Jackson levelling the score with a Hawks penalty.

With both defences dominating, it was difficult for either side to create scoring opportunities but a break by Cinderford outside half Liam Hemming, followed by drives from Shields and Evans, created enough pressure for the Hawks to infringe at the breakdown and Moffat restored the visitors’ lead just before the break with his second penalty.

The Hawks continued to try and show some enterprise and width but could not breech the well organised Cinderford defence.

Henley started the second half with much greater intent and a series of attacking drives from the back row of Bell, Lowe and Morrison came close. The Hawks were awarded a penalty at an attacking scrum and from the subsequent line-out, Rob Bell was driven over by the pack to give the Hawks the lead. Jackson converted.

This sparked the game into life as both sides upped the intensity and there was a number of fractious exchanges. The Hawks had further chances but their attempts to spread the ball were often frantic and lacked a clinical edge.

As the game entered the last 10 minutes, Cinderford continued to use their forwards to drive into Hawks territory and with Henley penalised again for infringing at the breakdown, the visitors kicked to the corner for an attacking line-out just 10 metres out. After securing the ball, the visitors’ pack drove over the line and James Williams was credited with the touchdown. Moffat converted to give the visitors a 13-10 lead.

Back came the Hawks who replied quickly with Connor Hayhow making a good break on the wing. He fed Butler who scampered through for the try, regaining the lead for the Hawks and launching joyous scenes amongst the home supporters. Jackson converted superbly from the touchline to give the Hawks a four point advantage with just six minutes remaining.

Cinderford were well up for the challenge and responded with a forward drive and a crash ball move which was spilled underneath the Hawks posts. The Hawks were yet again penalised at the resulting scrum and a number of forward drives by the Cinderford pack created space on the blind side for Goatley sneak in to score. Rees converted, again from the touch line. Three points behind and in the last minute, the Hawks launched a final attack and were awarded a penalty. With no time remaining, they elected to kick to level the scores but Jackson’s effort from wide out slipped outside the posts giving Cinderford a narrow victory.