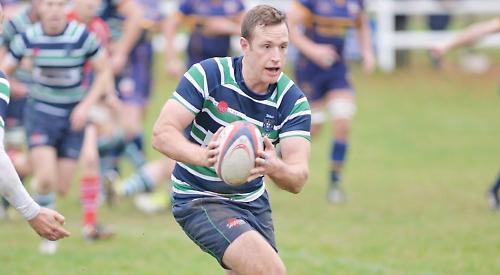 A PERFORMANCE of character and commitment gave Abbey their first win of 2017, the home side overcoming a Royal Wootton Bassett team which had comprehensively defeated them earlier in the season.

The win takes Abbey up to 40 points in South West One East, and they have leapfrogged Bassett into eighth place in the table.

After losing an early line-out, Abbey soon won the ball back again, with hooker Fungai Mutepfa and number eight David Cole both making good ground, but it was the visitors who looked more dangerous in the early stages. A sustained attack took them close to Abbey’s line, but scrum half Will Bevan intercepted a pass and booted clear to relieve the pressure.

Inside the Bassett 22, Hallett took the ball at the front of a lineout and Cole got to within two metres of the line. The ball was passed inside to Burns, who was late tackled as he chipped over the line, but Abbey lost the ball from the line-out.

A good tackle from prop Ed Whelan forced Bassett into touch, but Abbey lost the line-out again, giving visiting skipper David Hogg the chance to charge into the home half. Fortunately for Abbey, the visitors knocked on, Cole broke from the scrum and winger Jules Greenaway kicked to safety.

With around 20 minutes gone, things looked to be going wrong for the home side. Knights was yellow carded and Bassett had three successive five metre line-outs.

Abbey managed to keep their line intact with some frantic defence and eventually Burns came to the rescue again with another booming touch kick. But worse was to follow for Abbey when Shaw was carded, leaving Abbey with just 13 men and only six forwards. Greenaway was brought into the pack as a temporary second row at the next scrum, and Abbey looked almost certain to concede points with their numbers down.

But the Bassett points never materialised, and it was Abbey who broke the deadlock after 33 minutes. They had surprised the visitors by continuing to play attacking rugby, and Ross got close to the line after a high kick from Bevan.

Mitchell produced a tackle to halt Hogg and seconds later he was in possession inside the Bassett 22. He ran a diagonal line towards the left corner, and Cole collected the ball to plunge over for the opening try. Burns could not convert from a difficult angle, but Abbey had delivered a huge psychological blow by taking the lead with a depleted side.

Patrick McSweeney replaced Whelan in Abbey’s front row at the start of the second half, and he was soon involved in the action, making ground after receiving from Cole. Knights returned from the bin, and Abbey began to pressurise Bassett into errors.

Knights won a line-out and Ross, Hallett and McSweeney all handled before another diagonal run from Mitchell, well supported by Saunders, took Abbey into the Bassett 22. After 47 minutes Abbey were awarded a penalty, but Burns missed the target from 35 metres.

Abbey continued to attack, with Greenaway and Mitchell combining well in the next move. Shaw returned to the field and Sam Denslow replaced Cole. This change involved Shaw moving to number eight and Knights to the flank, with Denslow slotting in as a lock. Abbey resumed their attacks, with Hallett making 10 metres and Ross and Greenaway nearly creating a try after a five metre scrum.

With 53 minutes gone, Bassett fullback Dan Rees was yellow carded, and Burns kicked a simple penalty to put Abbey 8-0 up.

Abbey went straight back to the Bassett 22 after the restart, but after a catch and run from winger Charlie Gingell, Burns missed a fairly simple kick at goal.

Huggins launched the next attack, taking play close to the Bassett line, and then, with 15 minutes remaining, Abbey scored a good try. Shaw moved the ball to the blindside from a five metre scrum, and after Dampies had run diagonally to the touchline, his clever inside pass gave Gingell enough space to charge over the line. Burns could not convert, but Abbey were very clearly on a roll now and their increasing confidence was plain to see.

Ross, Mitchell and Dampies all ran well, Bassett continued to be harried into errors, and Greenaway nearly made it to the line from a crash ball move. Hallett was forced off with a blow to the face, Cole returning in his place, but Abbey still dominated, with Saunders doing his bit by pinching a Bassett line-out.

A good phase of play saw Cole, Mitchell, Dampies and Ross moving the ball to the right and Gingell narrowly failed to score. The pressure continued, and with game entering injury time Abbey had a five metre attacking scrum. Cole picked up as the forwards drove for the line; he exchanged passes with Shaw and then stretched to touch down for the decisive score. Burns again missed the conversion, but by now the game was won. Greenaway limped off with Diego De Marcilla Bahlsen replacing him, but there was little time left, certainly not long enough for Abbey to go for a bonus point try.