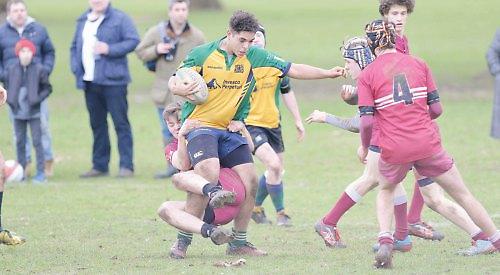 HENLEY Colts scored a thrilling win against top-of-the-table Amersham and Chiltern at Dry Leas on Sunday.

The Henley forwards were largely instrumental in enabling their side to gain the ascendancy in a first half that saw them camp on their opponents’ five-metre line for lengthy periods.

It was Amersham who scored first when they intercepted a pass and their wing ran the length of the field to secure an opportunistic try.

Henley came back strongly and continuous pressure resulted in a well worked line movement that was finished off in style by Wray. Henley skipper Jamie Winch converted to give his side a 7-5 lead.

After the interval Henley continued to impress with their running lines as half-backs Ben Venner and Winch constantly changed direction and set up good interplay between backs and forwards.

Alex O’Brien, James Rhodes, Zac Nearchou and Henry MacLeod were conspicuous in their charging runs at the opposition but the admirable Amersham defence remained solid.

Amersham went ahead when they scored a second try against the run of play but they failed to convert and, a little later, missed a straight-forward penalty.

In contrast Winch kicked a crucial penalty to level the scores 10-10 and ensure a tense final quarter to the game.

In a thrilling finish Henley’s second row Ed Houghton took a good line-out on the halfway line and with the ball moved excellently down the line Will Parton at fullback was able to slice through the Amersham back line and proceeded to outpace the defence in a dash for the line.

The last-minute score was converted by Winch to give Henley a 17-10 win.