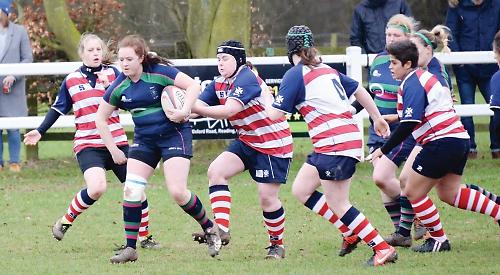 ABBEY NUNS secured their promotion to the Championship South Division 2 and won the league title in style as they demolished Rosslyn Park 101-0 at Rosehill on Sunday, writes Fiona Tomas.

The Nuns crossed the whitewash a staggering 15 times and showcased and ruthlessly extended their winning streak to 20 consecutive matches in all competitions.

Annette Tomas ran in five times while centre Alice Denton set a new club record for the number of tries scored by an individual player in one game – diving over the line eight times and enjoyed another good day at the office with the boot, kicking 66 of Abbey’s points.

Joey Fowler ran almost the entire length of the pitch to add to her own try total for the season – which has been a healthy amount by any flanker’s standards.

And Jess Potter continued to make up for her missed time on the side lines during the first half of the season by also grabbing a try and being voted forward of the match.

Despite the charismatic individual performances from playmakers Tomas and Denton, this was by far a team display which typified Abbey’s togetherness, work rate and ardent hunger to achieve a score line that few might have deemed impossible for a grassroots women’s rugby encounter.

Abbey’s director of rugby Dave Swan said he was delighted but not “remotely surprised” at the magnitude of what his side has achieved this season given their dedicated training programme.

He said: “The training regime they have adopted to ensure optimal fitness would challenge some professional teams. They have advanced and improved in huge strides and their technical development is plain to see – they are deserved league winners in my eyes.

“A 101-0 win to secure the league title is a testament to how far the Nuns have developed on their journey, it’s incredible really.”