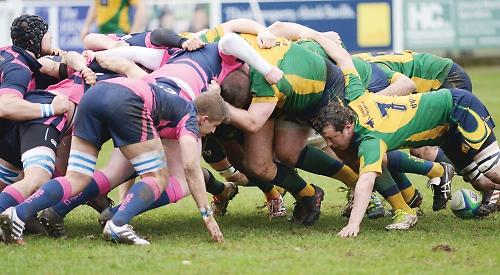 HOSTS Henley Hawks approached last Saturday’s game against Barnes with confidence following on from a well merited performance at Dry Leas the previous Saturday against mid-table Canterbury to ease the threat of relegation.

They also approached the match hoping there would not be a repeat of one of their worst performances of the season when they went down 36-14 at Barnes earlier in the season. However, from the start of this game Henley supporters got a distinct feeling of déjà vu.

After 14 minutes the Hawks were seven points in arrears when Barnes, in clearing from a Hawks attack with a kick deep into the home side’s 22, Hawks’ fullback Liam O’Neill tried to run out past the advancing Barnes backs, unsupported. This led to wing Robbie Martey scoring a try close to the posts which fullback Tom O’Toole converted with ease to put the visitors 7-0 in the lead. O’Toole was in good kicking form adding three penalties before half-time.

After the scoring of the Barnes try the Hawks took the game close to the visitors’ line.

However, their attacking play was punctuated by handling errors which came from frenetic play which consisted of trying to move the ball wide through their backs plagued with a number of handling errors, maybe due in part to playing in cold, drizzly, windy conditions.

Barnes were not out under a great deal of pressure and they retained possession far better than the Hawks, sensibly using short, more clinical passing.

After 15 minutes the game was influenced by what appeared to be a game changing incident. The Hawks mounted a driving maul near the visitors’ posts but this was stopped by centre David Butler kicking out at a Hawks player. Referee Robert Teare dealt immediately with this by the issue of a red card reducing Barnes to 14 men for the remainder of the game.

The Hawks could not use this numerical advantage to their benefit. In taking the game to the hosts’ half on a number of occasions for the remaining 25 minutes Barnes earned three penalties for various offences which were all converted to make the score 16-0 at half-time. The Hawks changed their tactics on the restart and reverted to the most successful method of attack they have used all season — the driving maul — supported invariably by inclusion of some of the backs. This put the Hawks on the scoreboard when hooker Tom Emery grounded the ball after an attacking line-out.

The try was not converted but the Henley Hawks scored again just 10 minutes later from a similar move. The scorer on this occasion was flanker Tom Hall who had replaced Tom Haynes on 51 minutes.

The use of the fresh legs of prop Ziana Montout-Alexis and Hall was vital in putting the Hawks in charge of the game. This was especially so when Hall collected a loose ball at pace 30 metres from the Barnes line and swept through unchallenged to touch down. This score was not converted as Jackson’s kick crashed against an upright.

The game was now on a knife edge with 17 minutes to go. The Hawks, on three occasions, came close to scoring again through driving mauls. They were put on the attack in the Barnes half by strong bursts down the left by recent signing of wing Ben Rath from London Scottish. Barnes continued to lead 16-15.

With two minutes of the game remaining Henley Hawks moved the ball wide through their backs from left to right to get the winning score.

Jackson had the result of the game dependent on his first successful kick of the game as in high tension his kick went through the posts.