High Wycombe have no answer to Hawks Colts 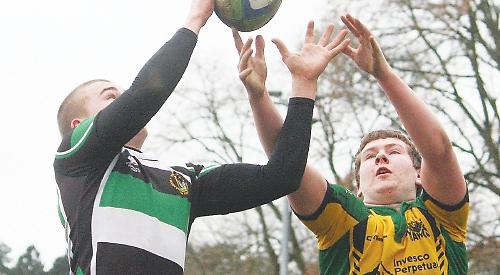 HENLEY Hawks Colts gained a massive 79-0 victory over High Wycombe in a league clash at Dry Leas on Sunday.

The hosts’ dominant performance was characterised by sweeping movements involving backs and forwards that covered the length and breadth of the field.

The opening score came from James Rhodes, who was terrific again at number eight, and moments later flanker, Freddie Atkinson, scored to enable Henley to lead 10-0.

Tries thereafter occurred at regular intervals with the third coming from the backs moving the ball quickly through the hands to wing, Harry Wray, who went over.

Henry Heath then powered his way through at centre to score the fourth try and from the ensuing kick-off play went several phases before fly-half, Jamie Winch, dummied and broke to score the fifth under the posts.

Henley led 31-0 at half-time with Winch having kicked three conversions.

After the interval Henley worked their way deep into their opponents’ territory from where a couple of long passes across the field found full back, Will Parton, who scored in the corner.

All the while, scrum-half Ben Venner was applying pressure on his opposite number and he was duly rewarded when he gathered an intercept, side-stepped several opponents and went over for a try that he duly converted to make it 43-0.

Soon afterwards Winch put an angled kick through the defensive line which Heath collected to score a converted try that brought up Henley’s 50 points.

By this stage the hosts were virtually unstoppable with Toby McDonagh, Ed Houghton, Ollie Cassells, Will Properjohn, Sam Williams and Henry Macleod assisting in providing much good ball.

The backs carved holes in the defence – the elusive Parton scored twice more to record a hat-trick; Wray added another and Callum Brady showed up well as the score mounted quickly to 67-0.

Alex O’Brien who impressed with his forceful running and hard tackling then went over for a converted try before Hugo Matthews followed up a grubber kick to make the final score 79-0.