Relentless Colts show no mercy as they extend cup march 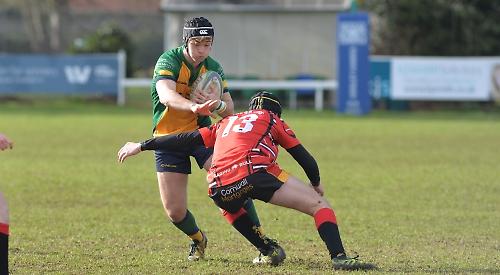 AN accomplished display in defence and attack gave Henley Hawks Colts a one-sided victory in their National Cup clash against St Austell, Cornwall.

The Henley scrum has excelled this season and on this occasion the props Henry Macleod and Sam Williams — as well as substitute Toby McDonagh — stood up well against their burly opponents.

The Henley line-out, with Ed Houghton conspicuous, has improved markedly whilst quality ball was won from broken play, enabling the exciting backline to show their paces.

The first try came after Henley had exerted relentless early pressure and was scored by the impressive Henry Heath knifing through at centre.

Soon afterwards, St Austell endeavoured to place a tactical kick over the Henley line but Heath intercepted on his own 22 before outpacing the opposition to score under the posts. Jamie Winch converted both tries to enable Henley to establish a useful 14-0 lead mid-way through the first half.

St Austell again worked their way deep into Henley territory and this time were rewarded when solid play from their pack secured an unconverted try in the corner. It seemed as if the visitors had found their rhythm but it would be the last time that they seriously challenged the Henley line until late in the game.

A feature of the hosts’ performance was their deadly tackling throughout with the slightly-built scrum-half, Ben Venner, magnificent in his cover defence.

It was Henley who scored again shortly before half-time when Winch created a half-break and fed Heath who off-loaded to Rhys Edwards, entering the line at full pace and crossing for another converted try. Henley led 21-0 at the break and shortly after the re-start, Winch put his side further ahead with a penalty.

Henley threatened another try for most of the second hald, notably through driving forward play with Oscar James, Will Properjohn and Alex O’Brien posing problems for St Austell.

When the try came, it was the result of the ball moving quickly through the hands to Callum Brady who made some 40 metres along the right flank before executing a smart switch movement with Heath. It was Heath’s hat-trick, a grand effort on an afternoon when Henley’s backs delighted an appreciative crowd.

During the last 10 minutes, St Austell made a sustained effort to register another score but Number 8 James Rhodes, Ivor Langley and the gritty Venner were not going to give them the last word.