First-half lead blown away as side lose out in scrums 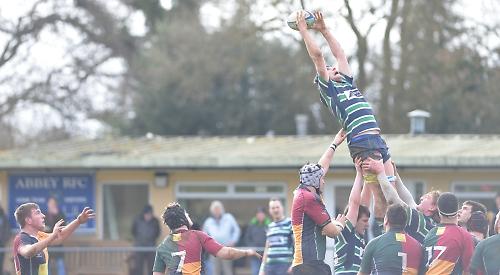 The hosts led 8-0 at half-time, having had the backing of a strong wind, but Windsor were comfortably the better side after the break and deserved their victory.

The defeat leaves Abbey just one place above the bottom three in South West Division One East.

Second row Jeremy Knights marked his 60th first-team game by leading the side out and Abbey started in promising style with No 8 Will Woodward catching the kick-off and running the ball back at the opposition.

Outside half Luke Burns made good ground with a long touch-kick, and then a kick and chase from winger Jules Greenaway took play into the Windsor 22.

But after Windsor had exerted pressure on the Abbey scrum the visitors counter-attacked well, and winger Gary Morgan was stopped five metres from the home line. A great kick ahead from flanker Omar Ellaboudy relieved the pressure, and skipper Sam Hallett made further ground before another good kick from Burns put Windsor back on the defensive.

Knights won Abbey’s first line-out, and soon after this an excellent move led to the first try of the game.

After an initial drive from Hallett, scrum half Will Bevan sent out a low pass which flanker Chris Shaw caught superbly. Burns, winger Charlie Gingell, centre Ollie Walton and fullback Gavin Dampies all handled as the ball was moved to the left, and the move concluded with Greenaway receiving from Dampies to cross the line in the corner. Walton was unable to convert, but Abbey looked good for their lead after 10 minutes.

Abbey continued to look strong in the opening quarter with Burns kicking intelligently and Shaw winning good ball at the front of the line-out. A break from Woodward resulted in Windsor conceding a penalty in front of their posts, and Walton made no mistake to increase the lead to 8-0.

They made their first replacement of the game after 22 minutes when Adam Postlethwaite replaced prop Jack Saunders, and he was soon involved in the action after Woodward had broken from the back of a scrum.

At this point Abbey looked to be competing well but for the rest of the half Windsor gradually got on top, particularly in the scrums, and the home team was not able to make full use of the wind.

A scrum was lost against the head as Windsor established themselves in the Abbey 22 and both Shaw and Ellaboudy put in good tackles as the visitors attacked close to the line.

Windsor had a chance to get their first points after 38 minutes, but winger Jack Gaylor saw his penalty bounce back into play off the right post. Abbey managed to claim possession from the rebound, but they lost the ball when trying to run from their own line and a five-metre scrum was conceded when Burns had a kick charged down.

Windsor continued to look dangerous in first-half injury time, and Abbey’s cause was not helped when Shaw was yellow-carded. Fortunately, the ball popped out of a five metre scrum on Abbey’s side when Windsor had the put-in, and Ellaboudy made 30 metres with the brilliant break. The ball went into touch near the halfway line, and after Knights had stolen a Windsor throw, the half ended with Abbey still 8-0 ahead.

David Cole replaced Ellaboudy at the start of the second half with Woodward moving to the flank and again Abbey started brightly as Burns made a great solo run into the Windsor 22.

Despite moving centre Tom Huggins into the pack, Abbey lost another scrum against the head, but after a minor bout of fisticuffs Windsor were penalised. Walton went for the posts, but the ball drifted wide to the left. A good catch and run from Burns kept Abbey’s momentum going, but Knights was forced out of the action with a dead leg after 50 minutes, Ellaboudy returning in his place. Meanwhile, Shaw returned from the bin with Windsor having failed to take advantage of his absence.

But then Windsor hit a purple patch. A prolonged assault on the home line resulted in the defence being stretched to the extent that outside half Ben Grant-Anderson was able to waltz over the line under the posts with no Abbey defender near him.

Gaylor converted and as he did so the influential Burns left the field with an injury. His departure saw Charlie Shackleford come on as a winger with Greenaway moving to fullback, Bevan to outside half and Dampies to scrum half. Within minutes of the change Windsor had doubled their score with a try following a flowing three-quarter move across the Abbey 22 which resulted in skipper Neil Baggett crossing the line wide on the left and then running in under the posts to give Gaylor an easy conversion.

Cole then made a 20-metre break as Abbey tried to find a way back into the game but Bevan could not gather the replacement’s pass in the visitors’ 22.

Saunders returned to the action when hooker Mark Toland went off injured, Postlethwaite moving to hooker. Abbey tried to attack again through Dampies, Huggins and Cole, and they got into losing bonus point territory when Walton kicked an excellent 30-metre penalty with eight minutes of normal time remaining.

But the game was lost in the next two minutes when, after a spell of aerial ping-pong, Greenaway kicked out on the full, giving Windsor a line out 40 metres from the Abbey line. The visitors won the ball and mauled it all the way to the posts where replacement hooker Lawrence Hewitt touched down. Again Gaylor converted.

In the dying minutes, Abbey elected to tap the ball from a penalty in the Windsor 22 and brave runs from Ellaboudy and Shaw took them to within a metre of the line. But prop Niall Kidd stole the ball and thrilled the visiting supporters with a 30-metre run. There was still time for one last Abbey attack, and after they were awarded another penalty Walton kicked for goal but his effort drifted wide.

Abbey have suffered too many defeats since Christmas, and they really need to produce something special at sixth-placed Banbury tomorrow (Saturday) to climb away from the danger area of the league.