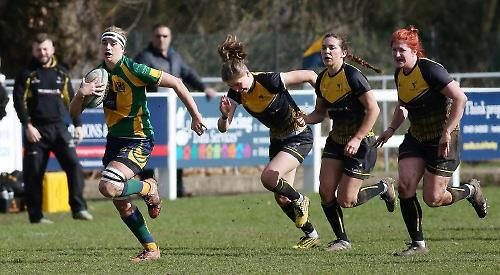 A FULL-STRENGTH Henley Hawks Women toppled Wasps 2nds in their final game of the season, keeping them off the bottom of the National Division Championship South.

Running out at Dry Leas on Saturday the women were high in confidence and believed they could win, having only narrowly lost to them at the start of the season despite finishing with just 13 players.

The Hawks had a strong start with some fast-paced rugby, showing some excellent handling which allowed them to build up the pitch.

Despite being turned over the women didn’t let this faze them and showed that their defence was just as good as their attack. A break from Wasps winger stopped metres from the line with a solid cover tackle for Dudding. But unfortunately they couldn’t prevent the visitors breaking the deadlock and taking a 5-0 lead.

The hosts got straight back into the game, running hard off the kick-off, driving Wasps back and forcing them into making errors. Having won the ball back, the Hawks went blind off the scrum with some brilliant offloads from Leeds to Wheeler to McFarland, who looked like she was clean through but frustratingly was chased down and knocked the ball on the tackle before being able to get the pass away.

After receiving a penalty and opting for touch, the Hawks won a scrum from the line-out which provided the platform for Wheeler to break off the back and score to put the sides all square going into the break. After the restart the Hawks made some solid running lines from Ferguson, Wysocki-Jones and Matthew to allow the Hawks to gain field position. There was great distribution from the back off the rucks from Leeds to McFarland who put Craig through a hole in the centres, to take the lead 10–5.

Wasps tried to respond straight away but the Hawks defence was solid with some great hits and turnovers from Hearn and Solowin. Despite their efforts, Wasps eventually scored in the corner to equalise. With time running out, the Hawks rebuilt, and after being awarded a few penalties they opted for scrums where they had been unstoppable all game. They were unlucky not to get over the line but instead were turned over by Wasps who cleared their line. With three minutes to go, the Hawks’s Ferguson won the ball from a scrum which allowed Wheeler to pick off the back and break the line for a 40m sprint for the line to make it 15-10.

Two minutes to go, all Henley had to do was keep possession. After collecting the ball from kick-off and picking and going from the ruck, great efforts from Wasps saw them turn it over and ship it wide but great pressure and defence once again from the Hawks forced an error and the full-time whistle was blown.

Players’ player went to No 8 Wheeler for her winning try while the coach’s player award went to captain Wysocki-Jones for solid defence and tackling.