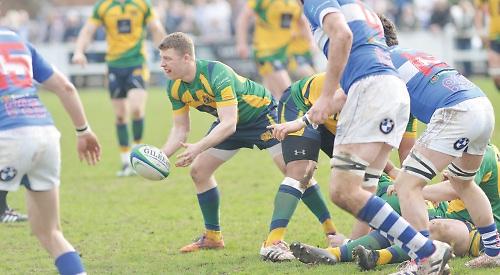 HENLEY HAWKS put in one of their better performances of the season at Dry Leas on Saturday and although they created plenty of problems for Bishop’s Stortford, the league leaders showed why they are the team to catch with an organised performance of power and speed.

The hosts to their credit never gave up and matched their high flying opponents for much of the game. However, the Hawks had to deal with long periods of constant pressure from their visitors and were undone by the more powerful and accurate performance of Bishop’s Stortford forwards and the speed of their backs, along with a loss of concentration that seems to have been the Hawks’ downfall on a number of occasions this year.

In almost perfect playing conditions the visitors started well and were quick to impose their physique and power on the Hawks and put them on the back foot but it was the home side who scored first. A good drive from Ziana Montout-Alexis resulted in a penalty for the Hawks which was quickly taken to allow Dave Manning to scamper over for the game’s first try. Jackson converted.

The play was fast and frantic with Bishop’s Stortford using their larger forwards to penetrate into Henley territory and put the Hawks defence under immense pressure. For a while the Hawks stood firm with Rob Bell and Tom Hall outstanding at the breakdown.

Just as it looked as though the Hawks would reach the break on level terms they lost concentration at vital moments and allowed the visitors to score twice in quick succession. Firstly, a slick handling move put William Simmonds clear and he beat a number of Henley defenders to score under the posts and secondly when Nick Clancy collected his own chip kick through. He linked with Jonathan George who in turn fed John Neville who had an easy run in. Banks converted both tries to give Bishop’s Stortford a 21-7 lead at the break.

It looked as though the Hawks were beginning to struggle with the visitors’ intensity but to their credit never gave in and evidently outscored the league leaders in the second half. They gave Bishop’s Stortford more than their fair share of headaches and problems to deal with.

The Hawks started the second half positively with fullback Sam Portland making a number of telling runs into Bishop’s Stortford territory.

The introduction of Jim Hadfield and Dave Hyde gave the Hawks fresh impetus, Hadfield securing the scrum and Hyde making his presence felt in the loose play.

A series of Hawks scrums set up the platform for Joe Butler to cross for the Hawks’ second try, again Jackson converted.

The visitors always managed to keep the Hawks at arm’s length on the scoreboard and shortly afterwards, poor Hawks tackling in the centre allowed a second try for John Neville. Banks converted. The Hawks were still competing fiercely and after a series of forward drives, scrum half George Jackson raced through and ran 30 metres to score near the posts. He converted his own try to put the Hawks in with a chance of at least a bonus point.

Henley enjoyed a period of possession but it was often in their own half and they struggled get out of their own territory with the larger Bishop’s Stortford forwards now dominating the breakdown. In attempting to run out of their own 22, the Hawks were penalised for holding on and Banks kicked a penalty to give the visitors a 31-21 lead with five minutes remaining.

It looked like the Hawks’ efforts would go unrewarded when a good break by the impressive Stortford second row Jonathan George allowed Tom Coleman to put a tactical chip through which ended in a good try for Sam Winter. Again Banks converted.

But back came the Hawks in the dying seconds, desperate to take something for their efforts and with the visitors constantly and illegally trying to see out the game, a quick penalty allowed Joe Butler to race through for his second try, the Hawks’ fourth and a thoroughly deserved bonus point. Jackson added the extras with a dropped goal.