Hawks coach tips side to end campaign on high note 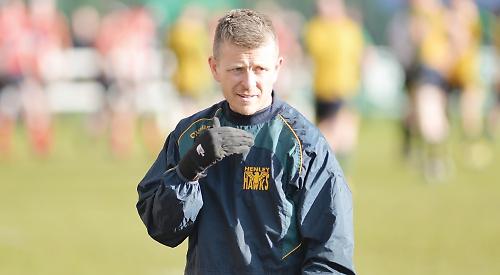 THE head coach of Henley Hawks has challenged his players to win all their remaining league fixtures.

Pete Davies says his side has found confidence and belief as recent results have seen them climb up National League Division 2 South.

Their three-game winning run was ended with a 28-38 home defeat to league leaders Bishop’s Stortford on Saturday but Davies feels it was a game they could have won.

“If we had made better decisions in our attacks in the first half we would have beaten Bishop’s Stortford,” Davies said. “Also, the three wins should have been more convincing.

“Results, although they have been good, have been a little bit frustrating. Aspects of our play have been outstanding but we have to be able to do that consistently.”

He puts his side’s shaky league form down to an influx of new inexperienced players and a failure of his more senior ones to influence games.

Davies said: “We had a good preseason but when results started to not go our way the new players found it difficult and their confidence was knocked, which was understandable. They had to learn some important lessons and we worked with them through the tough periods.

“There were also a lot of honest conversations with some of our senior players who were not leading by example, not taking ownership of the team on the field and bringing on the new players.”

Davies admits that his side had been over-complicating their play on the field and so has spent time on the training ground getting the basics right.

The new approach brought wins against Clifton, Barnes and Canterbury to ease any worries of relegation.

Davies says: “We drilled back to basics with defence, attack and set pieces. We were being too complicated in our play and were trying too many new things, which was tough for the new guys in the heat of battle.

“Now we have had a complete turnaround in attitude with the new players understanding what is expected of them and the senior players leading from the front, which has meant results have improved.”

The Hawks have six games left to play, with four at home, and will face the likes of London Irish Wild Geese who are battling to avoid the drop.

Davies said: “There will be some tough challenges in there against Worthing and Wild Geese but we know we are good enough to beat them and beat them well.

“I believe we can go the rest of the season unbeaten and end up two places higher and, if results go our way, maybe even further up.”

He added: “We need to get our mind-set right and play to our potential because we are not far away from being an outstanding team and fighting for promotion.”