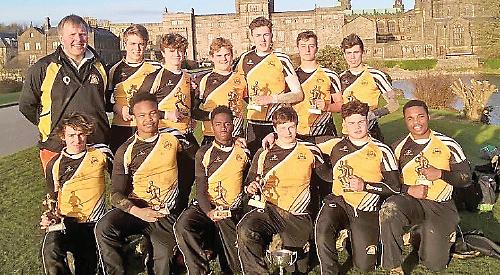 THE Oratory School’s senior colts sevens squad produced their best performance of the season to retain the Stonyhurst College Trophy on Monday of last week.

In the first two group games, the Oratory ran out comfortable 45-7 victors against Birkenhead School and 53-0 against Wisbech Grammar. The final group match was a contrast of styles, the direct approach against the expansive with The Oratory distributing the ball well to run out 24-10 winners against a big and physical Lancaster Grammar team.

The quarter final proved to be the hardest game of the day against St Ambrose College. At full-time the score was 14-14 so a period of extra time was played with a golden try by Morgan Macrae sending Oratory through to the semi-finals.

In the semi-finals Oratory faced hosts Stonyhurst College. With a large home support on the touchline, the Oratory battled back from a try down to win the game 29-14 with good support play being the difference between the two teams.

In the final against King’s Macclesfield the Oratory ran out 24-12 winners to win the cup with their expansive style of play.