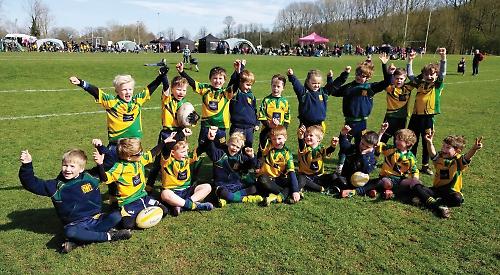 THE Henley U9 Hawks team dominated their pool at the Marlow rugby festival last Saturday with convincing victories over teams including Aylesbury and Pontyclun. Their ability to keep the ball alive and run at speed from deep caused the opponents huge problems with Henry French and Jack Renders giving stand-out performances.

The Henley Harriers had the tougher part of the draw playing against a very physical Tadley side but came away with a 6-2 win before defeating Aylesbury 5-3. Next was their toughest game against Pontyclun. Oliver Hewes and Thomas Ferguson created a fantastic try down the wing but Pontyclun came out on top 4-3. The fourth game saw Henley beat touring side Sils by 5-3.

Twenty-four players from the Henley U7 mini rugby squad also played at the festival, finishing second place in one of the pool competitions, together with a joint first in the TREDS (Teamwork, Respect, Enjoyment Discipline and Sportsmanship) score awards. All players received medals for their efforts.