Houghton and Winch clinch shield and spot in area final 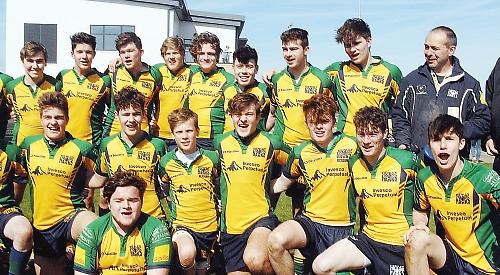 The victory has earned the Colts a place in the National South Final to be played at Henley’s Dry Leas ground on April 9.

At Melksham, against a strong crosswind, Henley opened the scoring through fly-half Jamie Winch kicking a penalty.

Bracknell countered quickly with a penalty kick of their own and soon after their big winger scored a try in the corner, giving them an 8-3 lead at the interval as Henley were to miss a relatively difficult penalty kick.

After the restart, Henley suffered a couple of unfortunate injuries, resulting in their impressive number eight, James Rhodes, and prop Scott Carey being replaced.

The situation certainly looked a little bleak for Henley as Bracknell went further ahead with a second penalty which gave them an 11-3 lead.

That Henley should regroup at this critical juncture in the game and ultimately take command did speak volumes about their character and fitness.

A tactical kick by Winch from inside his own 22 was held up in the wind and well controlled by the flying wing, Harry Wray, who set off on a stirring run to the corner. Wray was brought down five metres from the opposition try-line and with quick ball created from the ensuing ruck, Ben Venner fed Ollie Ainsworth who crashed over near the posts.

Winch converted and the game was evenly poised as Henley were just a point behind at 10-11 and their backs, Henry Heath, Callum Brady and Rhys Edwards, were looking dangerous with ball in hand. At the same time, Bracknell were determined to regain the ascendancy and Henley’s replacement, Morgan Zolkwer, and fullback, Will Parton, stood out in producing some good work under pressure. A sustained period of attack from Bracknell saw them held up across the Henley line by a splendid combined effort from flankers Alex O’Brien and Tom Priestley.

Failure to score in this period of pressure was a key factor in the outcome of the game because it appeared to affect Bracknell, whilst providing crucial encouragement for Henley.

In the last few minutes of the match, the Henley players were camped on their opponents’ line and a further score seemed inevitable.

The winning try came after Ainsworth gained important ground with a charging run and then, when he was tackled just short of the line, Ed Houghton gathered and went over.

Winch converted from underneath the posts, enabling Henley to record a 17-11 win.

It was a fine team effort from Henley which saw key contributions from the forwards, especially from Hugo Matthews, Sam Williams and Ivor Langley, who all played a vital role in the side holding their own against the formidable and well-drilled Bracknell team.