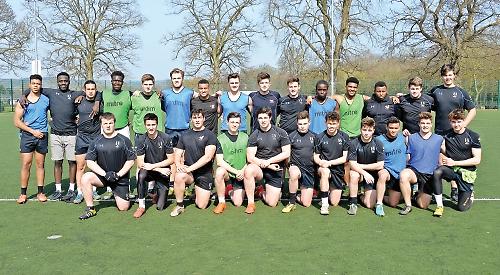 ABOUT 30 young rugby players from The Henley College are to compete at a tournament in Japan.

The students, who are all aged under 18, will play six matches against teams from around the world as part of the Sanix World Rugby Youth Invitational Tournament.

They were invited to take part by the RFU, the sport’s English governing body. The competition in Fukuoka prefecture, on the country’s southernmost island of Kyushu, runs from April 28 until May 5 and includes sides from Australia, Japan, South Africa, New Zealand and Ireland.

The boys are now training several times a week on the all-weather pitch at Henley Rugby Club, where they practice various drills and play sevens matches. Teacher Martin Unsworth said: “It’s the start of the rugby season for many of the other countries but our boys have just had a full season. In terms of training, it’s just a case of keeping them ticking over before we leave.

“We can’t just stop training but we have to get the balance right because we don’t want them to get injured before they go. We’ve already lost a few to injury and want to keep that to a minimum. The students are very excited but quite apprehensive as they’re going to be up against some of the top teams at their level internationally. It’s certainly going to be an experience because it’s very rare that you get to travel to Japan.”

He added: “We’ve tried to teach them a few Japanese phrases before we set off but it isn’t going all that well!”