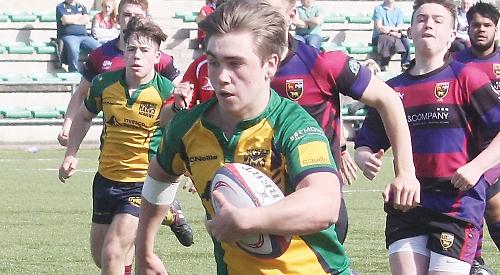 A DEPLETED Henley Hawks Colts side lost out at Maidenhead in a league encounter on Sunday in a match that was characterised by some hard running amidst frustratingly scrappy play.

A depleted Henley side – with eight of their successful U17 players unavailable – took a while to settle down and the home team was quick to capitalise.

Maidenhead’s greater cohesion enabled them to lead 14-0 after 10 minutes, but the visitors’ forwards gradually won their share of good ball and Ben Venner’s immaculate service had elusive runners such as Rhys Edwards, Will Parton and the lively Harry Wray shaking off tackles and gaining ground.

The Henley forwards, with Freddie Atkinson and Henry Macleod conspicuous, worked their way upfield and laid siege to Maidenhead’s line for some time, forcing several five-metre scrums in the process.

Eventually Maidenhead’s resilient defence was unstitched when Jamie Winch created a half-break and off-loaded to Rhys Edwards who ran strongly to score under the posts.

Winch’s conversion meant Henley were down 7-14 at half-time but still very much in the game.

Maidenhead increased their lead immediately after the break when Henley lost possession from a wayward pass. Maidenhead gathered the loose ball and surged deep into opposition territory from where they scored their third try and secured a 19-7 lead.

Henley came back impressively. A grubber kick from Winch forced an opening and with Parton and Edwards showing their pace, play swept rapidly downfield.

From the ensuing five-metre scrum, the ball moved quickly to Edwards who prised open the defence and was well rewarded with a fine try.

Minutes later, Henley ran the ball from a penalty and Alex O’Brien carved his way through the defence to record a well-taken try.

The conversion was again missed but the momentum was with Henley who were just two points behind at 17-19 and there was every reason that they could build further on their seven-match unbeaten streak. However, it was not to be as Henley conceded two soft tries to allow their opponents to move well clear with time running out.

O’Brien then capped a fine individual performance when he broke on the half-way line, shrugged off several tackles and powered through the cover defence to score a memorable try.