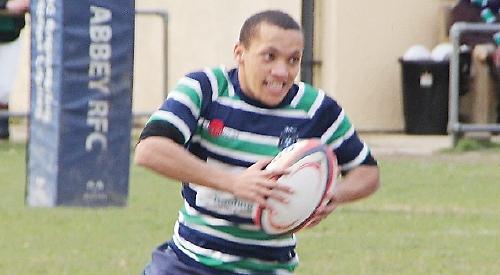 FOR the second Saturday running Abbey turned a game on its head in the final quarter, scoring four late tries in a fine fightback at Grove.

The visitors trailed 24-10 at one stage of the second half, but good handling and virtually non-stop attacking in the closing stages earned a deserved victory.

After this promising opening Abbey briefly went off the boil, and they went behind after seven minutes when home outside half Mike Martin landed a simple penalty following a high tackle. Shortly afterwards, Grove centre Guy Nicholl made 50 metres with a brilliant run, but fullback Gavin Dampies hauled him down 10 metres from the line.

A storming run from flanker Josh Tyler took play back into the visitors’ half, and from the ensuing move Grove scored their first try. A run from winger Connor Hull was stopped just short of the line in the left corner but Nicholl was up in support to take the scoring pass. Martin converted, but Grove’s joy was tempered by the departure of Hull, who was injured as he attempted to score.

With nearly 20 minutes gone Abbey began to attack again, with winger Arron Ross and centre Tom Huggins taking play into the home half. Ellaboudy won the ball at the front of the next line-out and a good run from Mitchell made 20 metres. The ball was recycled to skipper Sam Hallett who barged his way to within two metres of the line, and from the next phase Daniels did just enough to get over the line for his side’s first score. Walton added the conversion kick.

Daniels was replaced by Jack Saunders just before half-time, after which Walton levelled the score with a penalty from 35 metres.

Early in the second half the home side conceded a penalty plus and extra 10 metres, but Walton saw his well-struck kick go just wide from 45 metres out.

Another run from Nicholl, backed up by a good kick from Martin, took Grove back to the Abbey 22, and after a series of drives Law crashed through to score a try under the posts. Martin converted, and play resumed with Jeremy Knights on in the Abbey pack in place of Shaw.

Greenaway caught a high ball and ran 20 metres, but Grove were soon on the attack again with centre Sam Telling coming close to a try and second row Steve Dixon knocking on a potential scoring pass. A try came soon afterwards, with Telling running in under the posts. Martin converted, and with 62 minutes of normal time gone.

Daniels came back on for Saunders with Shaw returning for the injured Hallett. Woodward, Huggins and Mitchell tried to attack from deep, but poor handling in the backs saw Grove regain the advantage on the halfway line. Abbey’s game appeared to be falling apart at this stage with their play becoming increasingly sloppy, and they were forced to make another change when Walton, who had earlier received treatment for an injury, was forced to come off. Theo Evered replaced him. Twelve minutes of normal time remained when a 70 metre charge from Woodward saw his inside pass to Dampies in the home 22 saw the fullback halted by a high tackle from Martin, resulting in the first yellow card of the game. Abbey took a tap penalty, and after Shaw and Ellaboudy made ground, Huggins cut through the middle. His pass released Ellaboudy 25 metres from the home line and the flanker showed pace to cross for a try on the left. Mitchell was unable to convert.

For the next six minutes Abbey attacked almost continually. Without so much as a hint of attempting to kick possession away, they ran and handled with increasing confidence and purpose, with backs and forwards interpassing to great effect. Knights made ground, House ran 10 metres, and then Woodward charged again after a fourth Abbey scrum against the head. Mitchell’s 10 metre burst kept the pressure on Grove, and Toland, House, Shaw and Knights all featured in the next attack.

With two minutes of normal time left, Grove had a gilt-edged opportunity to wrap up the points when winger Alex McCarthy intercepted and looked to be heading for a try under the posts but Abbey’s defenders managed to catch him, and from the ensuing possession Abbey scored a remarkable try. Woodward and Evered handled well near the own line, and Dampies received the ball with the Grove line 80 metres away. He was the only player on the field capable of scoring from this situation, and his magnificent run took him clear for a memorable score, after which he improved matters still further by landing a good conversion from wide on the left.

Normal time was up, but a good eight minutes of injury time remained. Abbey now scented victory and they continued their attack-from-everywhere policy in search of the crucial winning try. Mitchell made 20 metres, Dampies and Ross carried on the attack and Ellaboudy made 15 metres to bring Abbey back to the Grove 22. Martin returned from the bin, but within a minute Grove were a man down again when McCarthy was carded for offside just after the referee had warned the home side about persistently conceding penalties.

Abbey elected to take a tap penalty and Shaw, Mitchell and Bevan moved play to the right. Huggins handled well as the ball was recycled, and after Dampies sprinted up the right wing his pass saw Ross dive over for a corner try. Dampies could not convert, but Abbey were ahead for the first time with a bonus point secured.

With three minutes left to play Abbey continued attacking, and Woodward, House and Ellaboudy were soon running at the home line again. Ellaboudy was stopped five metres short, but Abbey were where they wanted to be. Grove finally regained possession on their own five metre line, and Martin sent a high chip towards his 22. Waiting for the ball was Dampies, who caught the kick, and with a final triumphant burst cut straight through to the line, crossing for the decisive try wide on the left. The conversion was missed.