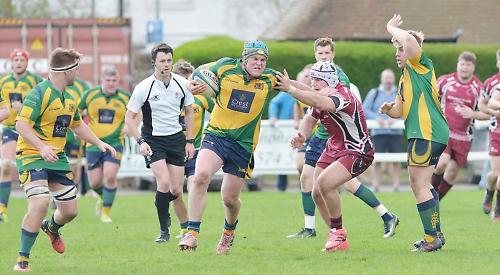 A PENALTY in the seventh minute of added time from visiting fullback Gary Kingdom gave Taunton Titans a narrow victory over a spirited Henley Hawks at Dry Leas on Saturday.

It was a close encounter throughout although Henley enjoyed a lot of possession and built up a 24-15 lead. However, despite outscoring their visitors by four tries to three, the Hawks will be disappointed that they didn’t convert all their efforts into victory.

Boosted by a convincing win at Worthing the previous week, the home side started at a thunderous pace and scored after just two minutes. A strong break from Alan Awcock set up a good attacking position and with Taunton illegally halting the Hawks attack, the home side elected to kick to the corner and from a driving line-out, Tom Hall crashed over.

Both sides made errors in their attempts to run the ball and the game was frantic and fractious on occasions.

Taunton targeted the breakdown aggressively but the Hawks held firm and more than matched the physicality of their larger opponents with Tom Hall and Rob Bell excelling for the home side.

The Hawks enjoyed a lot of possession at this stage and went through a lot of phases but failed to convert their dominance into points. Then, with a yellow card given to Henley outside half Joe Butler, the visitors struck twice in quick succession, both the result of a mistake by the Hawks whilst in possession and trying to attack.

A short side move from Henley broke down and Taunton winger Freddie Fraser gathered the ball and raced 40 metres along the touch line to score. Kingdom converted. Shortly afterwards, Taunton’s Conor Harbison broke clear from a scrum 30 metres out and evaded a number of tackles to score.

Henley kept up their pace and enjoyed a sustained period of possession and territory with Joe Butler making a couple of good breaks. The Hawks scrum was dominant with the front row of Dave Manning, Tom Emery and Jim Hadfield outstanding and just before the break, the pressure eventually told. Following a Taunton yellow card, good driving from the forwards allowed Dave Manning to score a try which Liam O’Neill converted to level the scores at 12-12 at half-time.

Henley started the second period as they had the first and their dominant scrum set up the Hawks’ third try. The Henley pack shoved Taunton off their own ball, winning a penalty in the process and from the resulting line-out, the ball was moved wide and Joe Butler made a half break to allow Liam O’Neill to score in the corner. O’Neill converted his own try.

Henley continued on the front foot with Dave Hyde and Tom Emery working well in the loose.

Taunton worked their way back into the game and enjoyed their best period of the match. An added problem for the Hawks was a head injury to prop Jim Hadfield and with his departure went the dominance that the Hawks held in the scrum. Taunton camped in the Henley 22 and after a series of scrums, reduced the arrears with a Kingdom penalty.

The Hawks responded well and broke out of their own half through O’Neill and it was Sam Portland who outpaced the Taunton defence to score in the corner for a bonus point try. At 24-15, the Hawks looked in control but Taunton, to their credit fought back and a lack of concentration in defence allowed Taunton skipper Nick Mason to score near the posts which Kingdom converted to reduce the Hawks lead to two points.

The Hawks looked as though they would hold on for victory with the forwards keeping possession well deep in the Taunton half and scrum half Harry Burn sniping around the blind side to good effect.

However, Henley can be their own worst enemy at times and they then gave away a number of successive penalties and it was only a matter of time before the visitors worked their way into Hawks territory and into penalty range. Taunton turned down one chance, looking for the bonus point win but a further penalty wide out was converted by Kingdom with the last kick of the match to give the Somerset side a narrow victory.