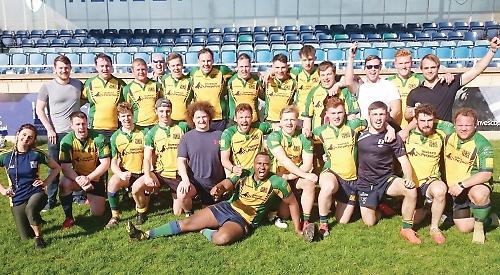 The Vikings pack showed early dominance in the scrums and strong carries from Dan Folley, James Thomas and man-of-the-match Will Franklin were a constant threat.

Mo Bangura started the scoring, crashing over from 10 metres. Andy Unsworth then scored a try down the blind side after good work from the Henley scrum. The backs began to enjoy possession and open space which allowed Will Franklin to run in two tries.

Charlie Chavasse playing well at hooker deputising for the injured Owyn Thatcher scored before half-time rumbling through the Windsor forwards as the Vikings went into half-time 27-7 up.

In the second half the Henley backs enjoyed more space and front foot ball with Olly Vine scoring two well-worked tries while substitute Ollie Jones came on to exchange passes to touch down in the left corner.

With Windsor being short of players due to injuries Henley lent them substitute James Tanner who scored against his team mates before Jones got his second of the match to complete the scoring.

Throughout the season, Henley and Newbury had been rivals for the top spot and both teams only loss was one game against each other. This five point win was critical and ensured that Henley pipped Newbury in the table by just one point.