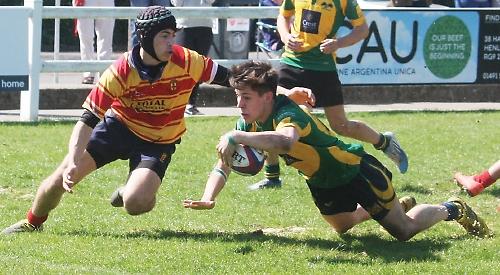 IN A thrilling England South U17 final, Henley Hawks delighted their supporters at Dry Leas by scoring the winning try against Medway with the last play of the game.

It was a match in which the south west champions Henley had defended resolutely for long periods after the south east winners, Medway, had taken an early 7-0 lead through breaking blind and covering 20 metres unchallenged.

There was no further score in the first half although Henley did have a fair share of the possession but tended to take wrong options and subsequently struggled to set up attacking opportunities.

Centres Henry Heath and Rhys Edwards were both looking dangerous but were tightly marked whilst the scrum gradually gained the upper hand through the solid efforts of Will Thomsett, Hugo Matthews and Henry Macleod.

After the interval Medway looked to build on their score by controlling territory and possession, but they were held up over the line on several occasions and missed a relatively easy penalty attempt with 15 minutes remaining.

The Henley forwards were holding their own with Sam Williams, Morgan Zolkwer and Oscar James coming into the picture, but it was the loose trio who would do much to take the game away from Medway.

The predatory Alex O’Brien, assisted by Tom Priestley and Ivor Langley, dominated play in the latter part of the game and enabled scrum-half, Ben Venner, to vary the direction taken and keep the backs supplied with good ball.

Suddenly, in the last quarter, Henley were operating at a frenetic pace and as the ball moved from one side of the field to the other, Will Parton seized his opportunity to scythe through the Medway backline and score a superbly-taken try.

With five minutes remaining, fly-half Jamie Winch missed what appeared to be a crucial conversion, but there would be another important twist to the tale.

With a line-out to Medway just outside their 22 and on the stroke of full time, Ed Houghton won the ball off the opposition hooker. In a dramatic conclusion to the game and after several phases of play, Winch dummied right to wrong-foot the opposition before slicing through the defence to score the winning try near the posts which he duly converted.

Henley’s victory has earned them a place in the RFU National U17 final against Bromsgrove – the England north winners – on April 30 at the Worcester Warriors’ Sixways Stadium.