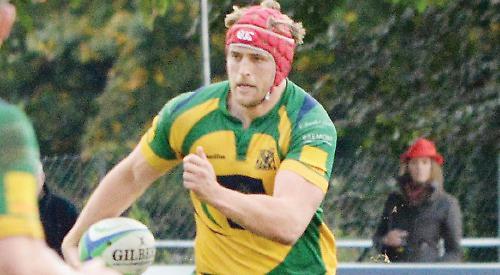 HENLEY HAWKS made their debut at the Hazelwood Drive complex last Saturday, which Wild Geese share with the London Irish professional team, on a sunny warm afternoon with a pitch dry and firm, suitable for open running rugby.

The result was a game which produced 11 tries, five by the Hawks and six by London Irish.

It was a match which the Wild Geese were determined to win to avoid relegation. For their part the Hawks approached the game to improve their position in Division 2 South which they were secure to compete in next season.

From the start the match had the makings of an intense struggle. The Hawks quickly established themselves through their driving forward play and successfully established a maul which enabled number eight David Hyde to touch down a try after three minutes which was converted by Liam O’Neill, who successfully kicked all his side’s tries that afternoon.

This lead was short lived in the ding-dong scoring of the first half. Within four minutes Tyler Bush had crossed for a try converted by centre Ben Kitching to equalise the score at 7-7. The Hawks had difficulty in dealing with the strong running Irish backs, in particular fullback George Owen, the league’s leading try scorer with 21 which became 22 when he touched down after 18 minutes which with a conversion by Kitching put Irish 14-7 in the lead. This was short lived as the lively Hawks scrum half Harry Burn caught the home defence unawares crossing from a tapped penalty. He was also instrumental in creating a try for the Hawks to take the lead again when he kicked ahead from a penalty for centre Alan Awcock to latch on to the ball to burst through the middle to score a converted try under the posts putting the Hawks 21-14 ahead after 25 minutes.

It was then that a crucial decision by referee David Conway influenced the balance of the game when he awarded a yellow card to Owen for a deliberate knock-on 15 metres from the Irish line when a try was imminent. Unfortunately he did not think a penalty try should be awarded to the Hawks despite there being no cover to prevent a score.

Owen was soon available at the other end of the pitch to score a second try to reduce the Hawks lead to 21-19 at half-time.

The game appeared to swing in the Hawks’ favour immediately after the break when they scored two converted tries in 10 minutes through the forceful flanker Tom Hall and a second by Burn who again ran strongly to touch down under the posts making the score 35-19.

From then onwards scoring was dominated by the Wild Geese. The Hawks, whose tackling in the first half was not low enough to down the swift running of the home side, now lost the initiative by other means. Injuries in the front row resulted in Hawks’ scrums being put in retreat. Restarts were twice put directly into touch. Another by the Irish was dealt with ineffectively leading to a push over try in the 64th minute by hooker Karl Gibson after ineffective tackling had led to tries being conceded by strong running backs Tom Richards and Kitching which put the Wild Geese in the lead 38-35.

The scoring was finalised at 41-35 in the final minute of the game after Irish were awarded a penalty in front of the posts which Kitching slotted home.

The Hawks earned two points from the game thanks to scoring five tries and earning a losing bonus point.