Henley mini sides sweep the board at Isle of Wight festival 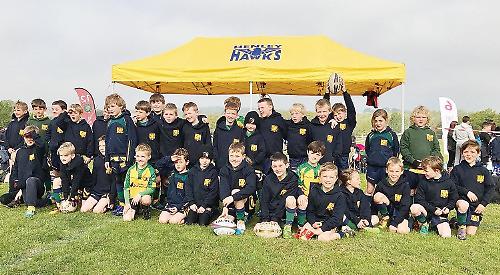 The results meant that both teams topped their pools and left the island undefeated to round off another successful season.

Henley Swifts U9s put together some good attacking rugby and spirited defence to win all five of their matches. Led by captain Seb Phillis and his two deputies, Harry Groves and Thomas Ferguson, they delivered quick wins against Old Alleynians, Vectone, Trojans and Beccs with good supporting efforts from Isaac Ahmed, James Mennie and William Tavinor.

The Swifts’ last match saw Bracknell move into a three try lead in as many minutes. Injuries to Groves and Mennie put the Swifts under further pressure with Noah Mercer and Rory Cordingley putting in significant defensive efforts in a stunning rearguard.

The leadership of Seb Phillis brought the Swifts back into the game, accelerating through the middle and bringing them back to 4-2 at half-time. With seconds remaining and the game poised at 4-4 Phillis touched down in the corner to cap an impressive all-round display.

Always dangerous in attack the Harriers scored more than 20 tries with the majority coming from a combination of line breaks from Dylan Price, Rob Murdoch and Felix Richardson finished off with incisive running from Alex Clark, Freddie Coultas and Woody Hamilton Hurst.

Most impressive was the way the team supported one another in defence, Charlotte Tong, Ben Griffiths, James Waggett and James Grubb bravely tackling often bigger opposition time and again to create the turnovers that proved decisive.

Henley Hawks U9s completed the trio of victories with five wins in five matches in their pool, scoring 24 tries and only conceding five.

There were resounding victories over strong London Scottish and Bracknell teams but the Hawks strength in depth in the squad including powerful tackling gave little room for opposition teams to gain much ground.

Henley U8s fielded 36 players in their first ever tour. With four teams entered into the event all players got plenty of match time.

The Eagles and Harriers teams both won four of their five matches with the Hawks delivering three wins and the Falcons securing one victory against some tough opposition.