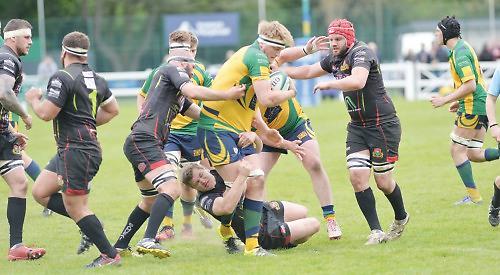 HENLEY HAWKS finished off their National 2 South campaign on a positive note with another bonus point win, this time against Cornish side Redruth at Dry Leas, writes Nick Pitson.

Leading 27-7 just after half-time, it looked like the Hawks would win at a canter as Redruth struggled to cope with the home side’s intensity and speed of attack.

However, a combination of Henley’s ill-discipline and Redruth starting to use their powerful forwards to dominate proceedings in the second half almost proved costly for the Hawks but they eventually beat off the Cornishmen’s challenge as both sides eventually scored four tries each.

Once again the Hawks came storming out of the blocks and with many supporters still in the clubhouse, fullback Tom Parton spotted a gap and outpaced the defence to score in the first minute of the game. Liam O’Neill converted.

Henley tried to play an expansive game at every opportunity and Redruth struggled to live with the speed and intensity of the Hawks play. Centres O’Neill and Alan Awcock looked dangerous whenever they got the ball and class act Parton showed why he has been involved with the England U20 squad. The forwards were used to good effect at close range with Dave Manning and Dave Clements to the fore. After another series of Henley attacks, Joe Butler extended the Hawks lead with a penalty.

Whenever Redruth had possession, they were under immense pressure and after a good turnover from Tom Hall, O’Neill made a fine break but Alan Awcock just couldn’t hang on to the final pass which would have resulted in another Hawks try.

After another good break from O’Neill, Dave Hyde broke through the Redruth defence to score under the posts, Butler converting. A further penalty from Butler gave the Hawks a 20-0 lead just before Henley second row Jake Albon was given a yellow card for stopping a Redruth attack in front of his own posts. After a siege of the Henley line, Shaun Buzza eventually burrowed over for Redruth’s first try which fullback Roger Rule converted to leave the score at 20-7 at the break.

Parton scored his second try of the game straight after the restart, again a fine move by outpacing the defence after scything through a gap in the Redruth defence. Butler converted. At 27-7, it looked like an easy afternoon for the Hawks.

However, Redruth then began to use their larger forwards to good effect with a number of powerful driving mauls. Number eight Kyle Marriott was at the centre of his side’s dominance and there was also a good impact from the bench. The driving maul became a real weapon for the visitors and they scored three tries during the second half using that ploy. Redruth were awarded a penalty try as the Hawks tried illegally to stop a drive launched from 40 metres out. Rule converted.

The Hawks looked ragged, were unable to keep the ball away from the visitors’ pack and began to give away a succession of penalties as the momentum began to swing in the visitors’ favour.

It looked as if the Cornishmen might complete an unlikely comeback but the Hawks eased their supporters’ worries and responded quickly with a try from Awcock. Sam Portland fielded a loose Redruth clearance and gave the ball to Awcock who used his pace and strength to beat off a number of tacklers to score in the corner from some 40 metres out.

Back came Redruth, with another driving maul to gain a bonus point of their own. Henley’s Albon was red carded for a second yellow card and the Reds’ Richard Brown led the Cornishmen’s drive to score. Rule converted.

With visitors within one score of the Hawks, a tense finish was anticipated but an attacking Redruth line-out was brilliantly stolen by Henley’s Hyde. The ball was cleared and the referee bought the league season to a close.