Resolute Hawks hold on to be crowned shield winners 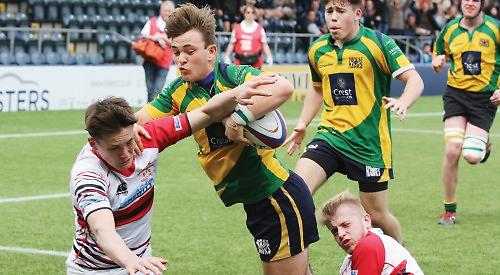 THE Henley Hawks Colts crowned a memorable season by defeating Bromsgrove at the Worcester Warriors Stadium to win the RFU’s national U17 shield final on Sunday.

In the course of an enthralling encounter the opening 10 minutes were perhaps the most significant in determining Henley’s ultimate success.

Bromsgrove pounded the Henley line during this period but heroic tackling, notably from Morgan Zolkwer and Ivor Langley, kept them at bay and, as often happens in rugby, the attacking side began to doubt its methods against such resolute and organised defence.

A moment of indecisiveness by the Bromsgrove inside backs saw Henley fly-half, Jamie Winch, break the line and gain 40 metres up-field.

The Henley support work was highly efficient and they surged into the Bromsgrove 22 where flanker Alex O’Brien was unstoppable as he gathered the ball and charged over for the opening try.

Bromsgrove came back forcefully and continued to dominate territorially but Henley’s astute scrum-half, Ben Venner, combined well with O’Brien, Henry Heath and number eight James Rhodes, to probe weak links in the opposing defence and Henley were able to fashion a second foray deep into their opponents’ half.

Good ball was secured and Henley fullback, Will Parton, capitalised on some quick off-loading to accelerate through a wavering defence and present a well-timed inside pass.

Callum Brady was on hand to take the ball but he still had work to do before crashing over for Henley’s second try and a 10-0 lead at the interval.

The second half followed a similar pattern with Bromsgrove kicking for position and relying on their catch and drive to create the opening with Henley forced to absorb an immense amount of pressure.

Bromsgrove possessed a formidable pack but yet again Henley’s front-line tight forwards – Henry Macleod, Will Thomsett, Sam Williams and Scott Carey – did not concede an inch.

Good timing between throwers, Hugo Matthews and Tom Grenfell, and jumpers, Ed Houghton and Langley, enabled Henley to win their share of line-out ball, whilst Bromsgrove used their possession to create the rolling maul that became increasingly effective as the game unfolded. Bromsgrove scored their first points through a penalty well into the second half and then, desperate to set up the elusive try, they were tempted to try the long pass which had been a useful part of their opponents’ play.

The pass was intercepted by the Henley centre, Rhys Edwards, deep in their own half and moments later he had scored a try under the posts that was converted by Jamie Winch to give Henley a 17-3 lead. The try was just reward for a Henley backline – Edwards, Heath, Brady, Harry Wray and Charlie Gibbon – that ran strongly and defended magnificently.

Bromsgrove were not finished, however, and with their rolling maul operating relatively smoothly they were able to score twice in the final few minutes and move within striking distance of the lead.

In a final tense session with almost six minutes of injury time, Tom Priestley at number eight was prominent in all phases of the game whilst Will Properjohn and Oscar James were most effective substitutions in providing the necessary energy to combat Bromsgrove’s last onslaught.