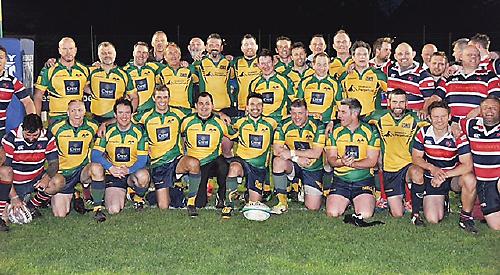 HENLEY VULTURES, captained by James Winterbottom and coached by Steve Barnes, ran out comfortable winners in the final of Oxfordshire Vets Floodlight Cup.

Will Spriggs secured the first of his four with an opening try closely followed by one for Anthony Campbell before Grove scored a converted try of their own.

Andy Noyce then scored the first two of his three tries to add to his tally of five conversions. Martin Nutt was at the centre of an attack when he sustained an injury and had to leave the field. Meanwhile, Simon Priestley fed Elio Recchia to score before Matt Payne broke the backs dominance with one of his two tries. Chris Darke took the half-time score to
46-7 with the first of his two tries.

After the break, normal service continued as Tristan Stubbs and Malcolm Kemp joined the fray along with the everlasting Simon Hearn who promptly added his name to the scoresheet.

Adam Payne secured Henley’s final try after Grove had countered with another of their own.