Rugby for the over-50s... without the running and tackling 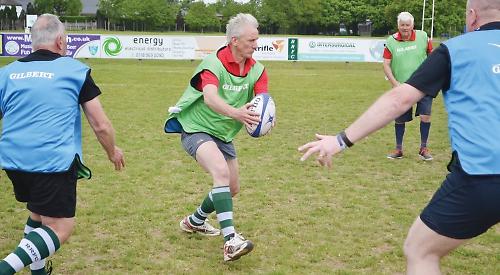 A WALKING rugby workshop for the over-50s was held at Reading Rugby Club in Sonning on Saturday.

In walking rugby tackling is replaced by a two-handed touch below the waist and there are two-man scrums. A dropped ball, missed pass or forward pass results in possession being surrendered to the other team.

He said: “The idea is to play a version of rugby that’s appropriate for people of retirement age. Most rugby clubs provide a form of rugby for everyone from under-fours right up to veterans, which is around 40.

“There hasn’t before been a form of rugby for people of retirement age but we reckon we provide rugby from cradle to grave and I don’t see why every club can’t do something similar. I was very pleased with the day. It went very well and we had a good attendance of players. I fielded quite a number of comments and enquiries afterwards from people interested in what’s going on.”

The club holds sessions on Tuesday and Sunday mornings and Wednesday evenings. For more information, call Mr Wickson on 0118 969 5999 or email walkingrugby@readingrfc.co.uk