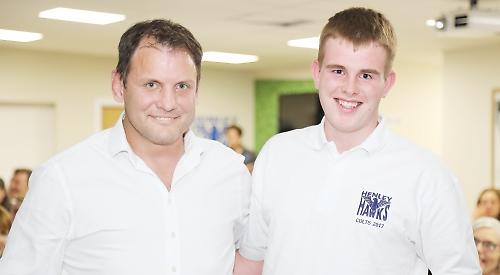 Prop Hadfield was presented with his award for playing 200 games for the Hawks by director of rugby Nigel Dudding in front of more than 100 players, members and club officials that had gathered in the new clubhouse to celebrate the club’s achievements.

Although the Hawks had a disappointing start to the season before the Christmas break they improved and had the fourth best record of the sides finishing at the top of the league thereafter.

Henley Bulls, who won six matches in the first half of the season in a touch league that consisted of second teams of Championship sides as well as those from Division 1 and 2, saw Josh Collis receive the player of the year award and Toby Howe pick up the most promising player accolade.

Henley Vikings, who were promoted to BB&O Division 1 saw Mohamed Bangura, James Owen and Owyn Thatcher all pick up awards. Chris Darke picked up the player of the year award for Henley Bears.

Elsewhere Danny Batty picked up a special award for oustanding contributions to Henley rugby while a combined services shirt framed from the RAF RFC was presented to the club after they had four players in the Combined Services side for their clash against Bath in April, namely Rob Bell, Brad Cook, Dave Manning and Stuart Philpott.