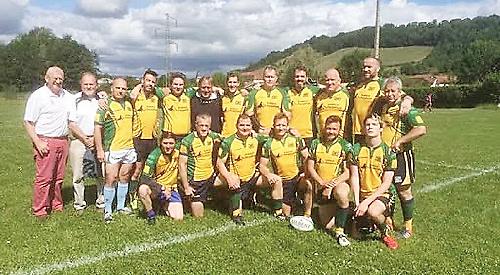 HENLEY VULTURES won their third trophy of the season when they triumphed in the Saint Savin Potes au Feu (Friends of the Fire) 15-a-side tournament last month.

As a result of injuries, work and family commitments, only 13 vultures took part, including just six of the side that won the Oxfordshire Cup final boarding the plane so the management were not slow to snaffle any spare bodies that looked remotely suitable in the Lyon or St Savin area.

The Vultures had to play seven 20-minute games with the bare 15 players available. This may have accounted for the lacklustre performance in the first game, which saw them salvage a draw, two tries apiece.

Following a tactical re-appraisal, the vultures went on a run of victories against sides from France, England and Northern Ireland.

Most other sides were able to use unlimited rolling substitutions, a luxury unavailable to Henley. But their backs, Andy Noyce, Simon Priestley, Pat Vickers, Matt Mann and Elio Recchio showed their class. Their next five games were all won by an aggregate score of 18 tries to five. Henley took to the field for the last time in the early evening as the only unbeaten side in the tournament, with one more victory required to lift the trophy.

The last game was a combative affair and so Henley, led by Steve Barnes, Ben Glossop and Simon Matthews, adapted their tactics to fight fire with fire and the game went down to the wire. Brief but crucial interventions of class from Vickers and Noyes mean that the Vultures triumphed with three tries to two.