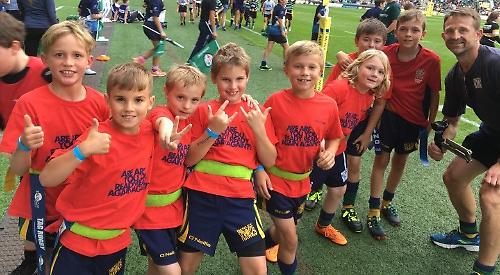 EIGHT players from Henley Rugby Club’s under 9s squad they played on the pitch at Twickenham Stadium last Saturday.

The team was invited by local Premiership side London Irish to take part in a festival next to Twickenham in the morning and as part of their entry were given tickets to watch Saracens and Northampton, followed by London Irish versus Harlequins.

The Hawks team took time to walk around the stadium and see the BT sport television presenters in action before taking their seats to watch a dominant Saracens side comprehensively defeat Northampton.

Shortly after the start of the second match the team assembled at the corner of the pitch and when the half-time whistle blew they took to the field, along with representatives of other clubs from across the country, to play a demonstration game in front of more than 60,000 spectators. Under 9s head coach Max Tilney said: “This really was an incredible opportunity for our players. For many it was their first experience of a Premiership match, let alone one at the home of rugby.

“Even at half-time the noise on the pitch from the crowd was deafening and their eight minutes went by in a flash but will undoubtedly stay with them for many years to come.

“Providing our younger members with inspiring experiences to continually enthuse them about the game is vital and I’d like to thank the community team at London Irish for inviting our players to be a part of the day.”

London Irish delivered a hard-earned victory against Harlequins to mark their return to the Premiership.

The mini and juniors sections at Henley work closely with London Irish, who also provide top-level midweek training at the club each Wednesday.