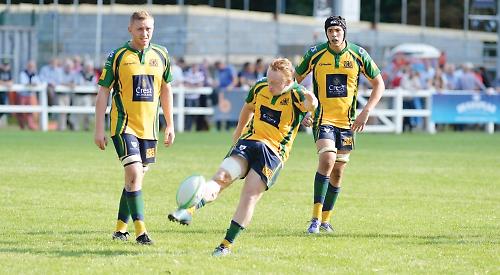 IN a game dubbed the “Battle of the Thames”, Henley Hawks got their season off to a winning start by coming back from 24-10 down to take the bragging rights in the local derby against Redingensians at Dry Leas on Saturday.

It wasn’t a vintage Hawks performance, and after a first half that left many supporters worried for the season ahead, they showed huge heart and determination in the second half that in the end, their Berkshire visitors couldn’t match.

Conditions were perfect and a good crowd saw the Hawks quick out of the blocks and scored an early try through Dave Hyde when he suddenly broke through the visitors’ defensive line and scampered 30m to score. Connor Murphy converted.

With Henley attacking again after the re-start, it looked as if they would add to their total but Henley then gifted the visitors a try for Jack Rossiter as he intercepted a loose pass and ran the length of the pitch to score. Humberstone converted.

Then a good move from the visitors’ backs forced a penalty that Humberstone converted to put the visitors into the lead before Murphy replied with a penalty of his own to level the scores again.

The Hawks failed to find any cohesion at this point and were guilty of making wrong choices at crucial times and failing to get some of the basics done properly.

Some aimless kicking gave the Rams the opportunity to run at the Hawks defence, allowing Steven Bryant to break a weak tackle in the centre and scamper in for a try which Humberstone converted.

The Hawks struggled to keep in the game but the line-out worked well for them and Dave Hyde and Marcus Lowe made some good driving runs.

Redingensians, however, almost scored again when another wild pass was intercepted. Rossiter broke clear but was caught deep into Hawks territory and should really have made more of his side’s chance.

With the Redingensians pack well on top, the half finished with the visitors camped on the Hawks line and, after a series of scrums and repeated infringements, which resulted in a yellow card for Brad Cook, the Berkshire side were awarded a penalty try which gave them a 24-10 lead at half-time.

Although starting the second half a man down, the Hawks took the game to Redingensians and achieved more possession and territory. This resulted in a penalty converted by Connor Murphy.

The Hawks forwards were now starting to dominate the loose play and the breakdown with Dave Manning, Rob Bell and Tom Emery was outstanding.

A move involving Manning and Joe Butler almost produced a scoring opportunity. The Hawks pressure was beginning to tell and Alan Awcock pounced on a loose pass but was very unfortunate to receive a yellow card as he seemed to be obstructed as he chased the ball. Henley responded well with a solid driving line-out which resulted in a yellow card for the Rams scrum half Greg Illingworth. A succession of drives was finally finished by Rob Bell who crashed over for the Hawks’ second try. Murphy converted.

The visitors were beginning to show signs of tiring, and they played most of the half with 14 men which began to take its toll.

The Hawks took the lead when Dave Manning finished off the Hawks’ favourite weapon, the driving line-out. In this passage of play, former Henley favourite Robbie Stapley was also given a yellow card for trying to illegally bring down the driving maul.

In the final minutes, the Hawks scrum won a penalty and Murphy capped a fine performance by ensuring the win with his second penalty.