Host side has no answer to Hawks' second half onslaught 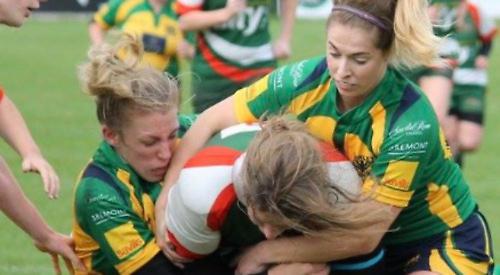 VISITING side Henley Hawks Women got their Championship 1 campaign off to a winning start with a 19-0 win at Plymouth Ladies on Sunday.

Plymouth started strongly and spent the majority of the first half attacking, but the Hawks’ defence stood strong, even when their heels were on their own try line.

Holly Williams, new recruit from Oxford Brookes, made a quick break from the half way line and good offloads took the Hawks to the Plymouth 22. Plymouth dug deep and made offensive tackles to keep the score to 0-0 at half time.

Hearn at 10 continued to pin Albion back into their own half. Having had pressure on the line-out during the whole game, Wheeler stole clean ball from Albion’s throw and quick hands from Timmins at nine allowed Solowin to make ground, offloading to centre partner Williams who took it within a couple of metres.

Hearn smuggled the ball away and dived over to break the deadlock. Humphreys converted to make it 7-0 after 50 minutes.

Knowing they needed to keep the pressure on, the tempo was increased by hard hits from Nash, Blamer and Clarke and good decisions made around the ruck to force Albion to kick for territory. After making a handful of solid one-on-one try-saving tackles, Thompson received a long kick and returned with purpose. Finding the overlap, quick offloads to Wheeler and on to Humphreys, allowed the powerful winger to stampede down the touchline, avoiding tackles and scoring under the posts. A conversion increased the lead to 14-0 at 68 minutes.

Knowing the importance of bonus points in this competitive league, the Hawks attacked again camping out in the Plymouth 22. Consistently strong pick-and-go moves around the fringes from Matthews, Wysocki-Jones and Hearn meant that Plymouth were on the back foot.

Having been held up, Henley kept the pressure on at the scrum with Simpson stepping into hooker seamlessly. With the defence being sucked into the ruck, skillful handling allowed the ball to get out to Wheeler to crash over after 80 minutes. The conversion was missed.