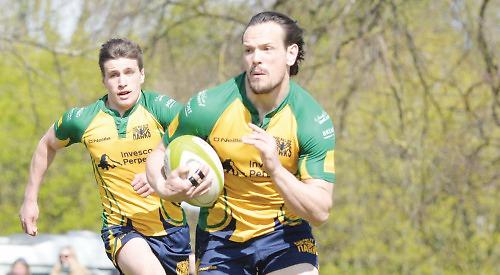 HENLEY BULLS were licking their wounds from their Zoo Shield defeat to the Redingensians Titans on the opening day of the season and made seven changes for last Saturday’s trip to Westcombe Park.

The Bulls were boosted by the presence of captain Tommy Haynes and Scott White in the back row and Simon Perry in the centre as well as former Hawks player Harry Jackson, who planned to return at hooker. However, Jackson’s plans were scuppered by an innocuous injury in the warm-up and skipper Haynes had his appearance shortened by the recurrence of a niggling back injury midway through the first half forcing the Bulls to use their replacements early on.

The conditions were dry and suited the Hawks for the opening 15 minutes and they made much of the opportunity to quicken the tempo and utilise James Hadfield and Simon Perry as the gain-line breakers, spending much of the first 20 minutes in Park’s territory. Toby Venner, playing at scrum half, showed both pace and guile slipping free of his opposite number to dive over and open the Bulls account which Sam Quelch converted with aplomb from a wide angle.

Park had several prodding attempts to break the Bulls defence but to a man throughout the first 30 minutes they held firm with some good defensive work from Matt Mann and Josh Huggins in the wider channels.

Perry took the next visit to Park’s territory as his opportunity to display his strength as he made yard after yard running hard on to Dan Hawkins’a delivery and eventually crashing over at the foot of the right post for the first of his brace. Following the conversion the Bulls gave up Haynes for 10 minutes for a deliberate knock-on. This proved a turning point in momentum as it coincided with a downpour and within a few minutes the hosts had responded with their own converted try when their hooker went over from a maul. Haynes was also forced to retire at this point through injury and Adam Geering stepped into the action.

The Bulls struggled to adapt to the wetter conditions at first but when restored to 15 men just before the break, the Bulls pressed again with Scott White leading much of the territorial gain, twisting and slipping tackles in fine style and allowing a position for Perry to again smash his way through the Park defence to touch down and give the Bulls a 21-7 lead.

Park made some tactical replacements at the break having seen success when they took a more direct approach and for much of the second half they dominated the territorial battle, making use of the natural slope. The Bulls set piece scrum was strong enough to nullify the pressure and along with Callum Large and Jake O’Leary ensuring line-out possession went the way of the Bulls they held firm until they lost Venner for 10 minutes as he impeded his opposite number’s path to the line illegally as they scored their second converted try.

Whilst down to 14 men for a second time the Bulls succumbed to more pressure and caught deep in their own 22 they were forced into a mistake that led to the game’s final try for Park as their pack smashed their way over in the corner from a driving maul. The try went unconverted leaving the Bulls with 15 minutes of the game to play with a two-point lead.

As Park made use of their fresh legs on the bench the Bulls put every effort into ensuring they spent what they could of the final minutes in Park’s territory against the slope and using Hadfield and White as the main actors in maintaining possession as Venner drove his pack upfield. A final opportunity to score the bonus try came five minutes from time but Venner was held up over the line and soon after Henson was brought crashing to the ground a few metres short.