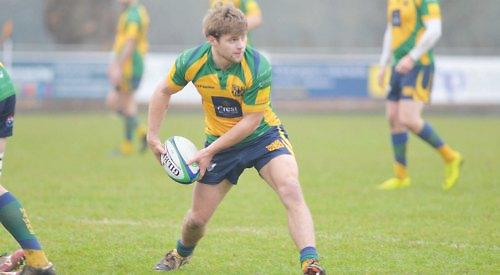 HENLEY HAWKS were outscored by five tries to two and went down 39-20 at Chinnor in the Oxfordshire derby at Thame last Saturday.

The occasion was played in a good spirit but the Hawks will be disappointed that they didn’t get more out of this game as the scoreboard didn’t quite reflect the run of play. They more than matched their big spending opponents in terms of commitment and possession but they ran into a Chinnor side whose defence was in excellent form. In contrast, it was the Hawks defence that was erratic and found wanting on a number of occasions, gifting the home side three tries in the first half.

Chinnor, for their part were clinical with most of their attacking play stemming from their fine halfbacks Craig Goodfellow and Johnny Bentley. The Chinnor backs were always threatening and when they ventured into the Hawks half, they cut through the Hawks midfield with ease when the chance arose. That said, the Hawks forwards battled hard for the whole match and by the end were well on top.

The Hawks, playing with the breeze in the first half, started brightly but it was Chinnor who opened the scoring when the first of a number of clean line breaks by Bentley, and then a chip through allowed Phil Chesters to win the race for the first try of the game.

A move from the base of a Hawks scrum involving Connor Murphy resulted in a penalty for Henley which Murphy converted.

The Hawks forwards were now finding some intensity and getting in amongst their bigger opponents with Dave Manning and Tom Emery outstanding in the loose. As the Hawks applied more pressure, drives by Emery and number eight Marcus Lowe set up a good attacking position. The referee played a good advantage and a cross kick from George Jackson was collected by Harry Burn to score the Hawks’ first try. Murphy converted.

However, all Henley’s previous good work was quickly undone as another break by Bentley led to a try for Chinnor by Kieran Goss that Bentley himself converted.

Back came the Hawks with good work from Dave Hyde, winning a penalty for Murphy to convert and put the Hawks back into the lead.

Chinnor began to find some rhythm and had their best period of the game in the 15 minutes before the break. The Hawks defence was breached again, this time by centre Nawaquiliva and after some good link play between the backs, Lamont crossed for the home side and Bentley again converted.

Despite looking vulnerable in defence, especially when Chinnor ran the ball, the Hawks can consider themselves very unlucky to have conceded a fourth try just before the break. A defensive scrum saw the Hawks pack drive the Chinnor eight back but as the home side’s scrum was falling apart, the referee deemed the Hawks had driven illegally. From the tap penalty, Nawaquiliva drove over under the posts for Bentley to convert and give Chinnor a 26-13 lead at half-time.

The previous week, the Hawks came back from a similar deficit to beat Redingensians but this time the Chinnor defence was too dominant.

The Hawks started the second period well. Matt Tibbatts, the former Chinnor player made an impact from the bench and there were some powerful drives from Brad Cook and Dave Clements. However, after another dominant Hawks scrum was penalised, Henley were guilty of giving away a succession of penalties which gave Chinnor the opportunity to put the game out of reach for the Hawks. Bentley converted two of them to give the home side a 32-13 lead. The Hawks continued to take the game to Chinnor. Rob Bell was prominent again and a good move involving Dave Manning and Brad Cook almost resulted in a try but Chinnor cleared their lines and eventually, Jamie Hamilton beat some weak Hawks defence to set up Will Bordell for Chinnor’s fifth try and Bentley’s fourth conversion.

The Hawks pack kept going and by now were well in charge up front. The use of the driving maul became effective and Chinnor struggled to contain the Hawks forward drives. A good run from Harry Burn, well supported by Dave Clements and Michel Kruzycki came close and set up a series of attacking scrums. With the home side under immense pressure, the referee had no alternative but to award the Hawks a penalty try as the Chinnor scrum fell apart. A fine reward for the packs’ efforts.

This was a hard fought game and there were some promising signs from the Hawks, especially in the forwards. However, they will need to sure up their defence before the visit of unbeaten Cinderford to Dry Leas on Saturday.