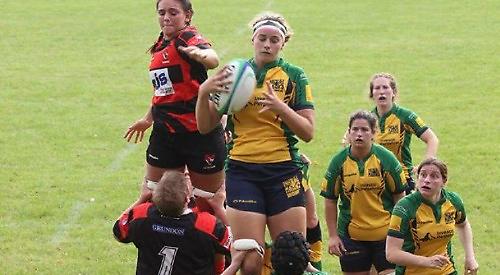 The hosts put on early pressure from the kick-off as the Hawks found themselves defending their line. Cheltenham used hard runners sucking in the Henley defence and good hands down the line saw them over the whitewash in the corner. The try was converted to put the hosts 7-0 ahead.

The Hawks worked back into the Cheltenham half with strong carries from Matthews, Wysocki-Jones and Balmer making yards every time. With a switch of play Bliss fed a well-timed pass to Wheeler who crashed over the line. Humphreys slotted over from out wide to bring the scores level.

Cheltenham were next to score. Following a few good phases of play, the hosts earned the right to go wide and the winger ran around the Henley defence to just be caught short of the line. The Tigers recycled the ball quickly and scored a converted try in the corner.

The Hawks hit back yet again kicking deep into the Tigers half. They managed to maintain Cheltenham and win the ball back. The Hawks were swinging the ball from touchline to touchline but could not find a way through the home side’s defence. A high tackle gave Henley the opportunity for three points in front of the posts. Humphreys safely added the points to reduce the arrears to 14-10.

With plenty of time remaining in the first half both sides threatened each other’s defence with big hits being made by Sealey, Collins and Simpson. Bliss and Hearn were controlling the attack nicely and both kicking for territory well, but it was Cheltenham’s fullback who gathered the ball and seemed to run in untouched under the posts on the stroke of half-time to make it 21-10.

The Hawks came out fighting in the second half as the kick-off was chased down hard by replacement Allen who made consecutive tackles which allowed the forwards to counter ruck and turn the ball over.

The Hawks had the ball for a number of phases and awarded a handful of penalties but could not find a way through a tough Tigers defence. An attacking scrum allowed Bliss to run blind, draw two defenders and deliver a perfectly timed pass to Humphreys to score in the corner. The conversion was narrowly missed to leave the score at 21-15.

The Hawks gathered the ball well from the restart and worked their way back into the opposition half. However, a knock on resulted in a scrum where the Cheltenham number eight was able to pick and go down the blind side and run almost the length of the pitch only to be stopped by Thompson. A quick recycle allowed the Tigers to run in under the sticks to make it 28-15.

Following a bad restart the home team opted for the scrum and once again the number eight was allowed too much space to run and good support meant the Tigers ran in again to make it 35-15.

The Hawks knew they’d made mistakes so were determined to make up for it and fight for the losing bonus point. They had all the territory and ball. A well executed line-out five metres out allowed Wysocki-Jones to just fall short of the white wash. Barclay-Klingle carried well but again was stopped before the line. The referee awarded a yellow card to the Cheltenham flanker for a series of infringements of hands in the ruck. After some good patience Hearn was able to put Humphreys in for her second of the day in the corner to make it 35-20.

Henley had secured the losing bonus point and all they had to do was play out the half. The defence was impeccable in the last quarter and Cheltenham found it hard to get out of their half.

The hosts had one last chance to rob the Hawks of their bonus point but Hearn made a fine cover tackle which allowed Solowin to steal the ball and put it into touch to finish the game.