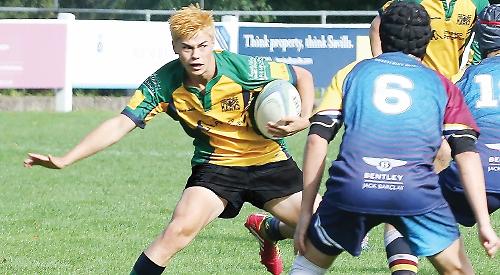 HENLEY Hawks Colts were impressive in their opening friendly of the season on Sunday where they defeated Oxford Harlequins 52-3.

A highlight of the match for the Henley side was the way in which a good mixture of younger colts combined well with the more experienced players to continue the side’s success of last year.

Henley, the reigning National Shield champions for their age group, signalled their intentions from the outset with hard running rugby and decisive tackling.

The first try came after probing breaks from scrum-half Ben Venner had created sufficient disarray in the defence for centre Ollie Ainsworth to cut inside and crash over.

Harlequins responded with an attacking surge downfield that earned them a penalty and their first points, but this was followed moments later by an enterprising Henley backline movement that saw Rhys Edwards score to make it 10-3.

The next try began with Henley’s highly promising fullback, Ben Cheng, who gathered a Harlequins clearance kick and quickly wrong-footed his pursuers before spinning the ball to the left flank where lock Ed Houghton broke powerfully to score a grand try which Matt Dalrymple converted. Good interplay between backs and forwards provided the platform for the next scoring opportunity which came through a fine break by Edwards with his try under the posts converted by Dalrymple and giving Henley a 24-3 half-time lead.

Immediately after the interval, Henley chipped ahead and with the bounce favouring Edwards, he was able to secure a splendid hat-trick of tries – Jamie Winch added the conversion to take the score to 31-3.

Winch placed an angled kick a metre from the Harlequins’ line and with possession won from the ensuing ruck, the ball was off-loaded rapidly to Dalrymple at centre and Henley recorded their sixth try.

Henley were applying constant pressure by this stage and skipper Tom Priestley capped an outstanding game to score another converted try after breaking from broken play to make it 45-3.

Dalrymple rounded off a good display with a well-taken opportunistic try in the corner that was followed by Winch kicking his fourth conversion.