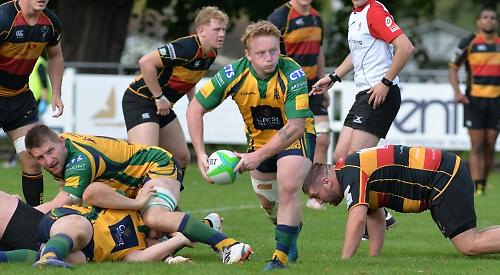 IT was a day to forget at Dry Leas on Saturday as Cinderford ran in 14 tries and with it dealt a 90-17 drubbing to the Hawks, one of the heaviest ever league defeats in Henley’s history.

Even the visiting supporters were surprised at the margin of their victory, but they were following a side who were well organised and far superior in skill, speed and strength. In contrast, the Hawks seemed to have learned little from their defeat at Chinnor last week. Their defence was ripped apart on numerous occasions and the tackling, such a strong part of their game in recent seasons was at times non-existent.

But for all Henley’s problems, it must be Cinderford who are applauded for a highly impressive performance that will rightly see them installed as one of the favourites for the league title.

Early on, the Hawks gained parity with their visitors and started brightly and had they taken an early overlap opportunity, things may have been a little different. Tom Hall and Dave Hyde were prominent for the Hawks but Cinderford were well organised and snuffed out any Henley chances.

It took the visitors a quarter of an hour to register their first score, a driving maul finished by hooker Nathan Taylor. Fullback James Moffat kicked the first of his 12 conversions.

The visitors began to look the more dangerous side as Henley struggled to contain the men from the Forest of Dean and a loose kick from the Hawks was collected by Kai Little who ran back through some weak tackling to score his side’s second try.

The Hawks can justifiably feel aggrieved with Cinderford’s next attack when the visitors’ winger appeared to drop the ball following a Connor Murphy box kick. The Hawks stopped but the referee adjudged the ball to have gone backwards and Little again broke clear to allow Matt Lane to cross for an easy try.

Henley got on the scoreboard with a Murphy penalty but the visitors were now looking threatening at every opportunity and ran in two more tries before the break. Number eight Harry Hone finished off a series of drives before a loose pass in a Hawks attack allowed Little to hack the ball clear, run 60m and show good skill to control the ball and touch down. Cinderford led 33-3 at the break.

Henley have produced two good second halves so far this season but any thoughts of a revival here were not forthcoming. The Hawks dropped the ball from a forward drive straightaway and from the resulting scrum, Taylor and Hone made the hard yards before Liam Hemming ghosted his way through the Hawks defence to score.

The Henley backs, although having a few chances, in contrast looked laboured and lacked any real threat or penetration. Weak defence then allowed three more Cinderford tries from Norville, Hemming and Barbarinsa.

The visitors then appeared to have their own lapse in concentration when Hawks’ Connor Murray took a quick line out just inside his own half and fed winger Harry Burn who raced 60m to score under the posts. Murphy converted.

Cinderford replied immediately with a try from fullback Moffat.

The last 10 minutes just compounded things for the Hawks as their defence fell apart and Cinderford ran in four more tries. The best try of the game was finished by Lane following some excellent passing and support play before further tries from Lane, Norville and Broady added to the Hawks’ despair.

It is difficult to find many positives after such a heavy defeat but the Hawks forwards kept going and they had the last word when a strong drive by Dave Clements set up hooker Tom Emery who crashed over for a try in the last play of the game. Murphy converted.

Cinderford are now many people’s favourites to challenge for the league title but it was a sorry day for the Hawks, one of the worst in their league history.