Trojans have no answer to dominant Hawks women 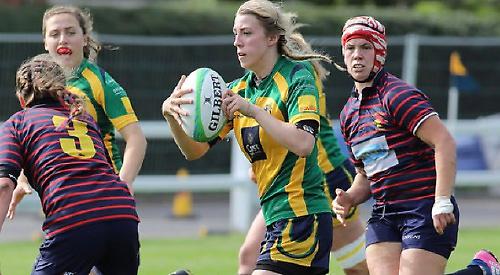 HENLEY Hawks Women ran out comfortable winners in their first home league match of the season against Southampton side Trojans on Sunday.

The Hawks won the toss and caught the kick-off cleanly with some big early carries from Wysocki-Jones and Wheeler. The Hawks wanted to stamp their authority early and did so by kicking for territory and making Trojans play out of their half.

Both sides were making mistakes and knock on after knock on meant the momentum consistently changing.

Hearn was kicking well out of hand and making territory each time. This forced Trojans to kick back. Thompson caught the high ball and ran it back and got the ball away down the hands to Williams who made a fantastic break down the wing, a skilful offload to Wheeler allowed her to cross the whitewash. The conversion was unsuccessful.

The pace and tempo of the game seems to have shocked Trojans and they were making unforced errors. The frustration was clearly building and a series of penalties allowed the Hawks to creep back into opposition half.

Wysocki-Jones ran in a quickly penalty only to be tackled short of the line. The Hawks forwards had patience and Matthews chose the right moment to pick and dive for the line near the posts.

The Hawks received the restart, Solowin running with conviction held the defence and played a perfectly timed ball to Moody who pressed on the accelerator and successfully outpaced the Trojans fullback and scored untouched under the posts to make it 19-0. A good turnover by Nash caused Trojans problems all over the park, and gave Wysocki-Jones the ball who crashed through the defensive line to score under the posts.

Again Trojans came back fighting but the away team could not find their way through and a vital turnover gave the Hawks the opportunity to clear the ball. Hearn had to leave the pitch due to injury and Henley had to defended their line with just 14 on the pitch.

With a reshuffle in the back at half-time the Hawks were going out a little shaken but had belief that they could close the game out and walk away with a try bonus point.

In the second half Nash secured the ball at the line-out and gave the ball to the backs who threaten the Trojans defence.

Davidson switched the play and fed to Wheeler who had two defenders to beat, a smart dummy fouled them and she dived for the line to touch down. The ry bonus point was secured as the Hawks led 31-0.

Trojans were awarded a penalty for a high tackle and kicked for the touch only for Henley to turn it over and receive a penalty.

The Hawks then kicked for touch, again having confidence in their set piece. Nash took the ball once more giving clean ball for the backs, Moody found a hole once more and ran half the pitch to score out wide.