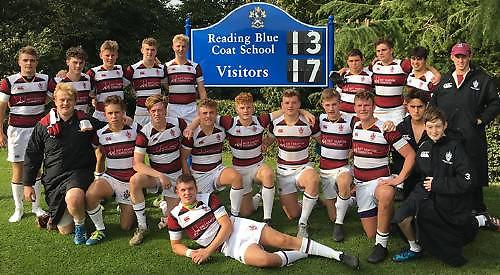 A LATE try by Ben Stacey was enough to give Shiplake College 1sts their first win against Blue Coat 1sts since 2012 last week.

Shiplake spent the first 10 minutes defending and giving away some sloppy penalties. At a three-point disadvantage Shiplake came back with some good lines through the 10 channel with Tom Coates and Robbie Cartwright regaining control of the game.

In the first part of the second half Shiplake spent most of the time in their own half, but Harvey Hendry made impressive ground with a rush from fullback, putting pressure on the Blue Coats, resulting in a penalty to Shiplake.

With the score at 12-6 Shiplake found themselves defending in their own half again, but the work of Will Properjohn kept the Blue Coats from making too much distance. However, the Blue Coats set up an impressive rolling maul which overcame Shiplake and put the Sonning side 13-12 ahead. With only 10 minutes remaining, Stacey raced up the wing and ploughed over the line to get the win for Shiplake.

SHIPLAKE COLLEGE 2nds recorded a convincing 54-12 win against BLUE COAT 2nds. Within the first minute Shiplake scored their first try of the game. JJ Acton made a fast start to the game and made his second try just five minutes in to put Shiplake 14-0 ahead. Further tries from Josh Howard and Brad Wilkins saw Shiplake lead 28-0 at half-time.

Blue Coat scored in the first minute of the second half but additional tries from Jack Reed, Will Parton and Joe Kerrison saw Shiplake to a comfortable 54-12 win.

Soon after Adam Porter flew up on the wing and scored try for Shiplake.

The second half started with a try being scored from the kick-off. From here on out Shiplake led on the score board until the final whistle was blown.