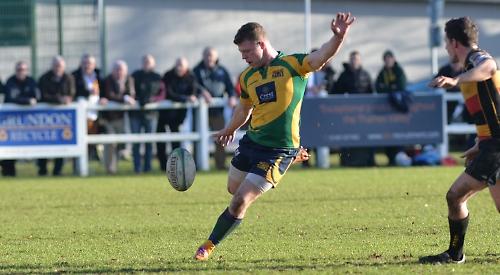 HENLEY HAWKS’ disappointing start to the season continued at Tonbridge Juddians when they conceded three tries to two in their 20-14 Division 2 South defeat last Saturday.

The pattern of the game for the Hawks continued in the same manner as to their previous three games in that they played their best most competitive rugby in the first and last quarter of each game. Once again fitness was not a problem.

The Hawks arrived to play on a fine dry day to defend wholeheartedly tackling with a fervour to stop the hosts at all costs. They had most of the possession for the first 25 minutes and were encouraged by a smart break by scrum-half George Jackson. However this turned out to be a rare occurrence and was only repeated again in the last 20 minutes of the game.

Nevertheless Alan Awcock, up from fullback, was soon creating a chance to open the scoring in the left corner of Tonbridge Juddians’ half when he a had chance to exploit an overlap but lost control of the ball.

The home side however were desperately defending and in quick succession conceded two yellow cards through a scrum offence and a deliberate knock-on. With only 13 men on the field the Hawks took advantage to drive over from a line-out through lock Dave Clements for Jackson to add the conversion

The Hawks defence then went into relapse which allowed Jon McMahon in for an unconverted try.

The Hawks took advantage of two extra players to immediately return to the attack and cease the opportunity to create a three-man overlap with some accurate handling for Awcock to run in for a try under the posts again converted by Jackson to give the Hawks a 14-5 half-time lead.

The Hawks could not increase or hold on to this lead as they were plagued by poor kicking out of hand in defence, suffering a number of kicks being charged down and bad tactical kicking which led to wing Will Ward racing in for a an unconverted try early in the second half to make it 14-10.

The Hawks defence was further breached after 67 minutes when McMahon burst through some relaxed tackling for his second try. Prior to this Tonbridge Juddians had changed their place kicker with Nathan Holmes, who had helped to keep the Hawks in the lead by missing three comparatively straight forward conversions, being replaced by Liam Prescott who slotted a penalty after 49 minutes and in converting his side’s third try had put the hosts in the lead, 20-14, with 12 minutes to go.

It was then that the Hawks again put pressure on the home defence. Attempts to add a try from a driving maul failed but a good clean break by Hawks’ centre Liam O’Neill promised a match winning try under the posts but this found no support. The Hawks had to be disappointingly content with just a bonus point for a six point loss.