Henley Hawks get back on track with bonus point win 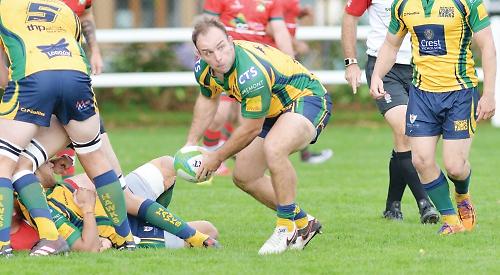 COVENTRY side Broadstreet’s first visit to Dry Leas ended in defeat on Saturday as the Henley Hawks ran out comfortable 41-17 winners and so ended their three game losing sequence.

Despite the scoreline, this game will not be remembered as a spectacle as there were plenty of elementary mistakes from both teams, showing why they both lie in the lower reaches of the league table at this stage of the season.

And while happy with the five try bonus point win, the Hawks should be frustrated that they weren’t able to be more clinical in attack — as Cinderford had shown two weeks ago — against a side struggling to come to terms with rugby at this level.

The Hawks forwards started with good intent, with Tom Emery, Brad Cook and Matt Tibbatts excelling in taking the game to the visitors. Broadstreet were soon under pressure and a driving line-out was finished by Emery after just five minutes to give the Hawks an early lead.

The visitors then enjoyed their first period of clean possession and Cliff Hodgson reduced the arrears with a penalty.

The Hawks forwards were able to pressurise Broadstreet’s line out and disrupted any chance of a threat from the visitors.

Most of Henley’s good play came from the forwards’ driving and support play while the backs struggled to find any fluency and at one point were almost guilty of gifting the visitors an interception try. However, the pressure exerted by the Hawks eventually led to a couple of penalty chances, both converted by George Jackson.

Alan Awcock then made a strong run and following drives from Tibbatts and Cook, the Hawks looked threatening with a scrum under the visitors’ posts. However, a good drive was deemed by the referee to be illegal and another opportunity was wasted.

With some improving continuity, the Hawks did get their second try just before half-time. A Broadstreet infringement on half way was kicked into the corner and in a carbon copy of the first try, Tom Emery finished off another driving maul to give the Hawks a 16-3 lead at the break.

Henley tried to exert some pressure and urgency into the game at the start of the second period. There were some nice touches from young centre Will Janes, while Dave Hyde and man-of-the-match Rob Bell were both outstanding in the loose exchanges. It was Hyde who scored the Hawks’ third try when he broke clear of a Broadstreet tackle to scamper 40m to score. Jackson converted.

Just when it looked as though Henley should start to really force home their advantage, their frailties in defence, very evident in recent weeks, were exposed again as they let the visitors back into the game.

Broadstreet enjoyed their best spell. They had sorted their line-out issues and from one of these, a move ended with centre Ryan O’Neill crossing for a try which Hodgson converted. The Hawks supporters were put further on edge when a Broadstreet forward drive then created an overlap for fullback Andrew Murray to race in for a try. With 10 minutes to go Hodgson converted to leave the score at 23-17.

Hawks scrum half George Jackson then alleviated any fears of an upset with two penalties as Henley’s pressure showed their greater experience in this league, Rob Bell and Michal Kruzycki both leading from the front.

With Broadstreet tiring towards the end, the Hawks pressure eventually bore success and they scored in the corner for their bonus point try through skipper Jake Albon following some good attacking play and a break by Bell. Finally, replacement scrum half Connor Murphy, playing his last game for the club before moving to play in the USA, made a clean break and created the space for Joe Butler to run in for a try unopposed. Murphy himself converted to give the Hawks a morale-boosting victory.

So a good victory for the Hawks but there is much to work on to ensure they are able to meet the standards that are expected in order to compete consistently at this level.