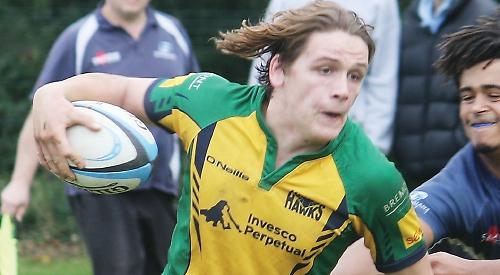 HENLEY Hawks Colts were a little unlucky that an improved display did not produce the desired result in their friendly encounter at Redingensians Rams Rugby Club on Sunday.

The visitors struggled to cope with Rams’ aggression in the opening 10 minutes and conceded two converted tries to be 14-0 down.

It was a testing period with three players leaving the field but Henley displayed admirable resilience and after sustained pressure they were rewarded when a powerful, charging run by Ollie Ainsworth resulted in a converted try.

Henry MacLeod, Morgan MacRae and Sam Williams were impressive throughout as a front-row triumvirate and the scrum provided Henley with a firm base against heavier opponents.

As Henley forced their way increasingly into the picture they conceded further points shortly before the interval when Rams turned line-out possession into a rolling maul that culminated in an unconverted try in the corner to lead 19-7.

Henley dominated play for much of the second half, partly through improved work in defence where Tom Priestley, Harry Wray, James Rhodes and Ben Venner were conspicuous for their fine tackling.

They also scored first in this half when Jamie Winch broke incisively and then sent out a long pass to Matt Dalrymple who cut inside for a well-executed converted try to reduce the score to 19-14.

Henley then relaxed momentarily and a series of errors led to Rams taking advantage and scoring under the posts.

Again Henley came back strongly and after camping in the Rams’ 22, set up a clinical passing movement between backs and forwards that saw Tom Priestley weave his way through the defence for a grand try.

Winch kicked his third conversion and Henley were within striking distance at 26-21 of what would have been a dramatic victory.

It was not to be as the ball was dropped in mid-field during a promising attacking move and a kick ahead blessed by a favourable bounce saw Rams race away for a converted try against the run of play.