Bahlsen in good form with boot as Abbey ease to victory 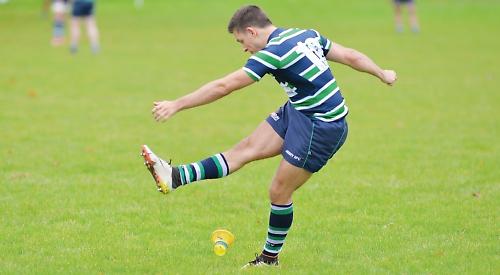 A CONFIDENT display of attacking rugby, boosted by three early tries, gave the hosts a comprehensive win over the struggling Slough-based outfit.

A trio of tries from Edward House, Mark Toland and Gavin Dampies inspired Abbey to their biggest win so far this season, catapulting them comfortably into the top half of Southern Counties North.

In control of the game from the off, Abbey’s dangerous back line, fortified by the inclusion of brothers Tom and Luke Burns, tested the visitors’ composure in the opening quarter while their forwards did the basics well to ensure a good platform.

Ill-discipline hampered Abbey’s game after a 19-0 lead, with hooker Toland and second-row Jeremy Knights both shown the yellow after infringement at the breakdown and Drifters were quick to capitalise on their one-man advantage with two well-worked team tries.

Abbey had the final say of the half, however, when Charlie Shackleton, called up from the second team for this fixture, scored his maiden try at senior level after chasing down an intelligent kick through from winger Diego Bahlsen.

After regrouping at the break, Abbey came out of the blocks firing and showcased the best of their attacking potential. Burns released flanker Ed House who showed fine handling skills to release winger Remi Norville in the corner.

Drifters replied with their final say of the match after yet another Abbey infringement, but then the day was Abbey’s. Forwards Chris Shaw and Will Woodward both came into their own by crossing the whitewash, but not before captain Will Bevan scored after not being held in a tackle.

Although Abbey’s penalty count was mounting, their defence stayed firm and the home side closed the game out with three more good individual tries from House, Knights and replacement Jules Greenaway. Bahlsen’s good day at the office with his boot ensured he
added 17 points of his own for the hosts.