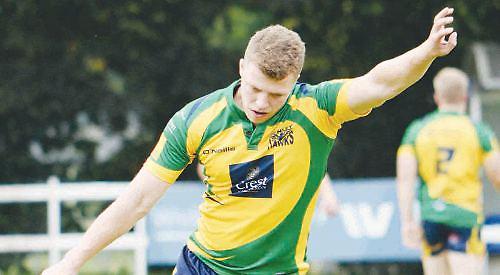 Old Redcliffians were the new opponents who had been promoted to the national leagues last year and the result was disappointing for Hawks supporters who would have expected this to be, on paper, a relatively straightforward assignment. However this league is already proving to be anything but predictable but this was a game Henley know they should have won given the possession they had.

The game started brightly for the visitors as constant pressure nearly resulted in early scores as the forwards worked hard to breach the line. However, the defence held firm and their only reward was a Connor Murphy penalty close to the posts.

The home side were now showing their true resilience as their big forwards started to make inroads into the Hawks defence and this caused a number of unforced errors and eventually the Henley line was breached after a series of punishing driving mauls, the try was unconverted but this had given Redcliffians just the lift they needed.

Henley responded well and eventually got the all-important score through David Clements who worked tirelessly all afternoon to be driven over for a good continuity try. Murphy added the extras and at this point Henley should have pushed on to enhance their lead, but as in previous weeks the opposition were once again allowed to pin the Hawks back inside their own 22 and an inevitable penalty resulted bringing the score to 10-8 in the visitors’ favour.

There was just enough time for Henley to gain the upper hand again as Murphy sent over another reasonably straightforward penalty. With the scoreline of 13-8 in their favour it looked as if the visitors would now push forward and secure victory.

However, they were now playing up a significant slope and into the wind. Early pressure brought a good opportunity for Will Janes to score but the final pass to Xavier Andre went astray.

Both of the Redcliffians tries in the second half came from deep positions as their big forwards penetrated the defence and severely punished some Henley errors. The see-saw nature of the game continued as Redcliffians took their chance for a converted try after 50 minutes to take the score to 15-13 in their favour. They then added a simple penalty to stretch the lead to five points.

Henley showed their true mettle by taking the game to their opponents and scored a try through Tibbatts after constant pressure and good offloading from Bell and Jackson. The conversion went astray but with the score at 18-18 there was a tense finale in prospect.

The hosts were first to score as a mix-up in the Henley defence allowed a simple score which was converted and at seven points adrift it looked as if the visitors were in for a shock defeat. To Henley’s credit they mounted a blistering attack which Tibbatts again finished well being driven over the line by the pack and Jackson landed a good conversion.

It was now all to play for at 25-25 and Henley launched wave after wave of attacks in a desperate attempt to secure the winning bonus point. The home side held out well for a draw, a result that moved them off the bottom of the table.

There will be lessons learned from this match about taking every opportunity and cutting out basic fundamental mistakes. There is no doubt about the potential of this Henley team, they will now be working hard to build some consistency into performance which will see them move up the table.