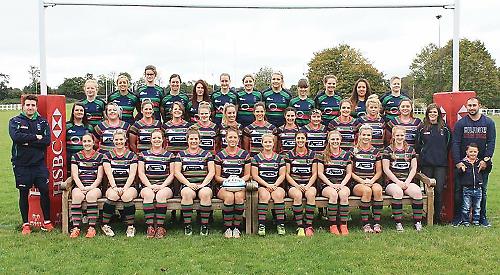 ABBEY NUNS put in a dominant performance against island visitors Guernsey to maintains their place at the top of Championship South West 2 on Sunday.

Early pressure from lock Nat Mitchell ensured Abbey were on the front foot and it wasn’t long before prop Harriet Driver crossed from close range. Subsequent team tries, finished by centre Megan Watts and Tomas, as well as a huge team effort in defence when Guernsey threatened their line, ensured a comfortable half-time lead.

The start of the second half saw a period of Nuns indiscipline, when centre Louisa Burgham was binned for dubious persistent offside and Guernsey bit back with a well-worked try of their own, capitalising on their one-man advantage and a momentary lax Abbey defence. Abbey Nuns were quick to respond and replied with two tries from Tomas as well as a superb individual run from Abi Wall, having moved from flanker to centre due to a Watts injury.

The Nuns continued to apply pressure to their home end; flanker Pippa Robinson stole a try from a sterling run from halfway as well as hooker Claire Stevens following a charge down which prop Jess Potter intelligently recovered. Everything was playing the right way for the Nuns and any loose ball was pounced upon, resulting in Tomas’s fourth try.