Portland touches down to earn side bonus point win 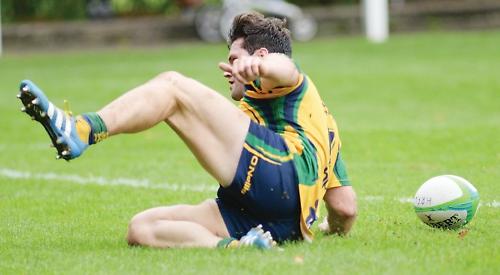 It was an error-strewn game between two evenly matched sides but Henley’s intent to play the game at pace and their dominance in territory and possession, particularly in the first half, was enough to see off the men from Devon, who to their credit fought back well to make it an interesting last 10 minutes.

The Hawks opened brightly but it was the visitors who opened the scoring with their first visit into the Hawks half after 15 minutes. A line-out following a Henley infringement allowed the visitors to create a powerful driving maul and prop Dan Southworth was credited with the try. Jordon Petherbridge converted.

The Hawks responded, taking the game to their visitors and tried to play with quick possession and a fast pace. They managed to get the ball wide on a number of occasions early on but the Barnstaple defence was well organised and although the Hawks played with good intent, any scoring threat was minimal with a number of missed passes or errors between the ball handlers.

However, the forwards, with ball in hand, linked well with Brad Cook, Dave Hyde and Dave Clements making good inroads to the Barnstaple defence and the pressure eventually reaped rewards as the Hawks got on the scoreboard with a George Jackson penalty.

Wing forward Rob Bell was excellent in his link play and there were good runs from Andre and young centre Will Janes. Although there were some handling errors, pressure eventually told and after George Primett and Tom Emery had launched themselves at the Barnstaple defence, prop Brad Cook broke clear to scamper over from 30 metres for a try which Jackson converted to give the Hawks the lead.

Petherbridge levelled things at 10-10 for the visitors with a penalty but it was Henley who were now enjoying most of the territory and possession and they eventually went ahead with a try from Dave Clements who collected a good inside pass from Jake Albon. Jackson converted to give the Hawks a 17-10 lead at half-time.

Henley extended their lead straight after the break when another Hawks attack broke down but Liam O’Neill collected the loose ball and ran in for a try in the corner from 30m.

Outside half Joe Butler began to find some space and and made an excellent break and with good support from Dave Clements, Henley came close to adding to their score. They were illegally stopped by the visitors’ defence but the pressure continued and was again rewarded with the Hawks’ bonus point try when winger Sam Portland collected an inside pass from Simon Perry to score. Jackson’s conversion gave the Hawks a 29-10 lead. Just as it looked as if the Hawks would see out the game comfortably, they let Barnstaple back into the game. An attacking flurry from the visitors ended with a good finish in the corner from the right winger Will Topps.

The men from Devon then quickly regained possession and broke the Hawks defence again to get within five metres from the Henley line. Barnstaple won a series of scrum penalties and although the Hawks put in an excellent drive into the last one, number eight Gareth Evans picked up the ball from the base of his retreating scrum and ran in under the posts for a try that Petherbridge converted to put the visitors within one converted try.

Barnstaple could sense they could get something from the game and they started to pressurise Henley into making mistakes. The visitors kicked a penalty into the corner hoping to use their driving maul but the line-out was excellently stolen by the Hawks pack.

The Barnstaple forwards continued to drive at the Henley line in the final moments but the Hawks defence stood firm and they eventually won a turnover and were able to clear their lines. From the resulting play, the Hawks put George Jackson into position to put the ball into the car park and ensure the Hawks held on for their second consecutive bonus point victory at Dry Leas.