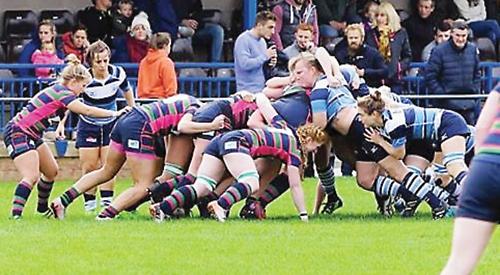 ABBEY NUNS went down to their first defeat of the season in a keenly contested match at Newbury on Sunday.

The game started with a statement of intent from the home side putting in a solid hit on Mel Murphy who was making her debut for the Nuns.

Newbury forced an early mistake from the Nuns but it played to the strength of the visitors’ pack who dominated much of the scrum contest throughout the game.

Early mistakes from both sides littered the opening exchanges but this led to Annette Tomas making the most of the constant back and forth by spotting a gap in-between the Newbury centres and running clean through to score from almost the length of the field try.

The following kick-off gave Newbury a chance to show off their impressive press defence and work the Nuns hard, eventually forcing a turn over and by strong running from their pack forcing themselves into the Nuns’ 22. This is where they remained camped for large periods of the first half, taking advantage of pressure penalties conceded and putting their first points of the day on the board through the boot of their goal kicker.

Newbury constantly threatened to put more points on the scoreboard but they were not clinical in their finishing, knocking the ball on multiple times playing to the Nuns’ pack strength.

Although the poor discipline of the Nuns led to a good run from their openside flanker — who was the star performer — taking all the Nuns defenders out the game creating two-on-one situation in the corner for an easy score.

The second half went much the same way as the first with Newbury forcing the Nuns into mistakes and pouncing on every opportunity to turn over the ball and attack a tiring side.

They were made to work for the further two tries they added but it seemed all too much for a Nuns side whose heroic first half defence had taken its toll.