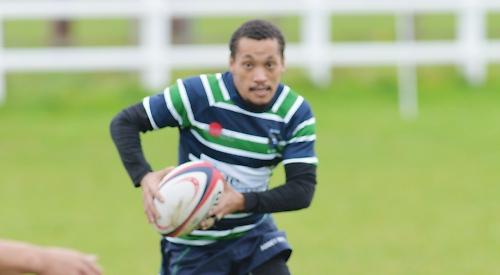 A TACTICAL performance from Abbey gave them victory over Gosford All Blacks at Stratfield Brake Sportsground on Saturday.

The visitors made good use of a strong wind in the first half and led 28-5 at half-time with a four try bonus point already in the bag. In a more even second half Abbey defended well when required and never looked like losing the match.

The wind was blowing straight down the pitch at kick-off time and Abbey had it behind them in the first half. They made a dream start to the game, taking the lead inside the first two minutes when outside half Luke Burns chipped the ball over the defence five metres from the home line. The ball bounced perfectly for fullback Gavin Dampies and despite the close proximity of his opposite number Ben Bodinham he crossed the line unopposed and touched down under the posts. Winger Diego de Marcilla Bahlsen converted.

Abbey won a penalty at the opening scrum of the game, and skipper Will Bevan produced the first of a series of good touch kicks to send Abbey back into the home half. Hooker Mark Toland threw to the front of the line-out — any other throw was a risk with such a strong wind — and second row Jeremy Knights won the ball comfortably. However, Burns had his kick ahead charged down and Gosford were able to attack again. This time they stayed in the Abbey 22, and they scored their first points of the afternoon in the seventh minute when flanker Dan Hughes chased a kick to the right corner and just managed to get to the ball first. Ellis could not convert.

Second row Chris Shaw won the next line-out for Abbey, and after a good drive from prop Richard King Gosford conceded a penalty. Bevan kicked Abbey into the home 22 and after Shaw had won the line-out, number eight Will Woodward and Knights both drove forward before Gosford were again penalised. Bevan kicked for the corner, Knights won the lineout, and Abbey’s drive for the line was only just halted.

Yet again the home side conceded a penalty, and this time Abbey chose to take a scrum. From it, Woodward made five metres to the right, and the ball then travelled via centre Jack Lambert-Taylor and Dampies to Remi Norville. The winger touched down in the right corner, and de Marcilla Bahlsen landed the conversion from the touchline.

A high kick from Burns soon put Gosford under pressure again, and a third Abbey try was scored soon afterwards. Knights stole the ball at a home line-out, Woodward made 10 metres, and then centre Ben Mitchell went on a brilliant diagonal run towards the left corner. He found Toland in support, and the hooker crashed over for the try. De Marcilla Bahlsen scored the conversion to put Abbey 21-5 up after 21 minutes.

After half an hour of play, Knights won another ball at the front of a line-out and Woodward led the charge into the home half. The ball went via Shaw to Mitchell, and after another clever 30 metre run he sent Dampies in under the posts for the bonus point try. De Marcilla Bahlsen again converted.

The wind got even stronger after the break, but it did not stop Abbey running the ball and putting Gosford under pressure. Mitchell made 10 metres from a tap penalty, and then Lambert-Taylor made a 20 metre break. A good counterattack from hooker Liam Donnelly nearly put home winger James Groves in the clear, but Abbey forced him into touch.

As the sky darkened, Abbey found themselves defending at a line-out in their own 22, but again Knights won possession, and a 40 metre run from Woodward put Abbey on the front foot again.

King was replaced by Fungai Mutepfa after 56 minutes, but soon afterwards Abbey were reduced to 14 men when Knights was yellow-carded for kicking the ball away after a penalty was awarded.

The visitors were under pressure for the next few minutes as Gosford played probably their best rugby of the game. This culminated in a try for Bodinham after 62 minutes.

Charlie Gingell replaced Dampies, who was suffering from cramp, and soon after Knights returned to the action as the visitors made the game absolutely safe with another try. Woodward passed to Bevan inside his own half and the scrum half accelerated in a run to the line. Ellis pursued him all the way, but Bevan held him off to cross wide on the right. De Marcilla Bahlsen was unable to convert but with just six minutes of normal time remaining the game was won.

With third replacement Charlie Shackleford suffering from hamstring trouble, Abbey were forced to play the final two minutes with 14 men when Dampies again left the field, but they retained possession well and were in control when the final whistle sounded.